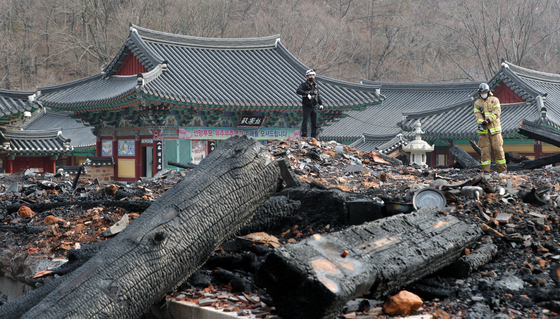 Firefighters on Saturday survey the charred remains of Daeungjeon hall at Naejang Temple in Jeongeup, North Jeolla after a disgruntled monk torched the building. [NEWS1]


A disgruntled, inebriated Buddhist monk torched the main hall of Naejang Temple in Jeongeup, North Jeolla on Friday and reported the arson five minutes later, according to the police.

Police said the monk set fire to Daeungjeon Hall at 6:30 p.m. and called in the crime at 6:35 p.m., confessing to committing the arson. The monk made no attempt to flee the scene and waited for police to take him into custody.

Upon seeing the hall glow red as it began burning, monks at Naejang Temple said they attempted to put the fire out with on-site extinguishers, but could not get the flames under control.

“By the time the rest of the monks learned about the fire, the flames had already spread all over Daeungjeon Hall,” said one monk at the temple.

Due to its location nestled in the mountains, firefighters took over 20 minutes after receiving the report to reach the burning temple building. They got the fire under control around 7:53 p.m., but at that point the hall had already burned down. It was the main building in the temple complex.

The fire was completely extinguished at 9:10 p.m, leaving nothing but charred rafters and smoldering embers.

According to police, the arsonist was a 53-year-old trainee monk who arrived at Naejang Temple three months ago. “While staying at the temple, the suspect became resentful over an internal feud with some of the other monks and started a fire in a fit of anger after drinking alcohol,” said the police.

“The suspect himself called in the fire to police, but wooden buildings are susceptible to significant damage if firefighting efforts do not begin within five minutes of the start of the fire,” police added.

In response to the arson, the Jogye Order of Korean Buddhism, to which Naejang Temple belongs, vowed to investigate the reason for the crime.

“This act represents a complete betrayal of the basic morality expected of our practitioners and cannot be justified in any way,” the order said in a statement on Friday.

“We will not only punish the arsonist with the maximum penalty available according to religious law, but we will also thoroughly investigate the causes and background of the arson.”

Although the temple was reconstructed after the war, Daeungjeon Hall was lost once more to fire, presumably caused by a short-circuit, in October 2012.

After the 2012 fire, the city of Jeongeup funded the 2.5 billion won ($2.2 million) reconstruction of the Daeungjeon building, which was completed in 2015.

Friday’s fire is not the first time that disgruntled individuals have committed arson against Korea’s cultural heritage.

In February 2008, a 69-year-old pensioner destroyed the 610-year-old Namdaemun gate, the country’s designated No. 1 national treasure, by spreading paint thinner on the floor of the gate’s wooden structure and setting it alight.

In that case, the arsonist started the fire because he was angry about the amount of compensation he received for his house from a construction company that carried out a development project from 1997 to 1998.