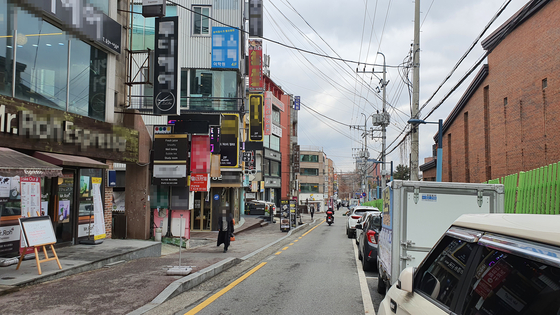 A street near Hannam University in Daejeon on March 3. [SHIN JIN-HO]

The streets near the campus of Hannam University in Daejeon used to be packed with students at this time of year.

Now only advertisements plastered on the windows of empty stores greet visitors.

“Many of us in the area are going out of business, as most university classes are being held online in the pandemic and students are not returning to the campus,” one store owner in the neighborhood told the JoongAng Ilbo on Wednesday. “I’m afraid that at this rate, half of the stores in the area will go out of business in the next couple of years.”

One owner of a building in the area told the JoongAng Ilbo that most of the store owners have vacated since the onset of the pandemic last year, with no sign of new owners.

The situation is not too different for owners of one-room apartments in the area, which usually were rented to students.

“We had at least 10 rooms occupied out of the total 12 in my building last year, but this year, we have managed just six,” said an apartment owner surnamed Kim. “I started advertising the rooms myself [instead of through a real-estate agency] to save costs but it’s been so hard to find a student looking to board in the area.”

Hannam University, which has around 18,000 registered students, is holding classes that have more than 25 students online. Some professors and students of smaller-sized classes also have the option to take classes virtually, if they wish to do so.

Other universities in Daejeon, including Pai Chai University and Mokwon University, are also holding most classes, except those that are lab-based, visual or related to performing arts, virtually.

According to some real-estate agents in the area, the commercial districts around university campuses outside of the greater Seoul area — Seoul Incheon and Gyeonggi — were already struggling before the pandemic.

“The situation wasn’t great before the pandemic hit the nation,” said a real-estate agent with an office near Honam University in Gwangju. 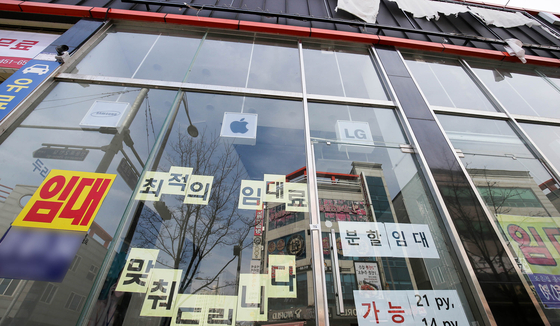 A store near Chonnam National University in Gwangju with advertisements for renters plastered on its windows. [JANG JEONG-PIL]

Some of these universities outside of the greater Seoul area had been struggling to fill their freshmen student classes before the pandemic hit.


In a survey earlier this year, the JoongAng Ilbo found that nearly one out of 10 universities in Korea were struggling to fill their freshman classes. The paper surveyed 187 universities throughout the country, of which 18 were found to have competition ratios of less than one in their regular college admissions. A competition ratio compares the number of applicants with the total number of available spots. Less than one means there are fewer applicants than spots.

Of the 18 universities with competition ratios of less than one, 11 were located in the Yeongnam and Honam regions, which include North and South Gyeongsang, Busan, Daegu, Ulsan, Gwangju and North and South Jeolla.

The pandemic also hit Korea in the year it experienced the first drop in its population.

Korea’s registered population dropped some 20,000 in 2020, marking the first-ever annual fall, according to the Ministry of the Interior and Safety. The main reason for the decline in registered population was a drop in births. Korea has the lowest fertility rate in the world at 0.92 as of 2019.

“In my 20 years of running my restaurant, the last two years were painful,” said a 50-year-old restaurant owner located just outside the front gate of Chungbuk National University in Cheongju, North Chungcheong. “There were days when we were packed every day in the beginning of each semester. I don’t know if such a day will come again.”