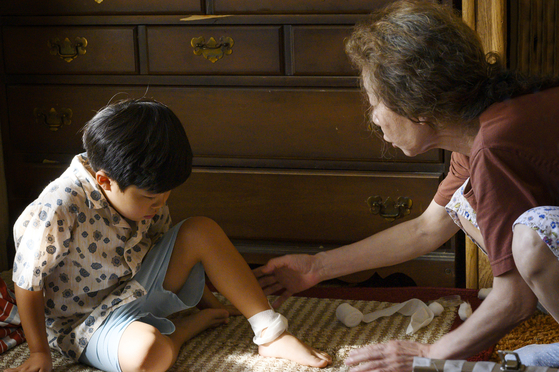 JANG JOO-YOUNG
The author is an EYE team reporter of the JoongAng Ilbo.

The 2009 film “Inglourious Basterds,” directed by Quentin Tarantino, is a story of a commando unit that penetrates a small Nazi-occupied French village in the last stages of World War II. Characters speak various languages including German, French and Italian. According to Paste Magazine, about 30 percent of the movie is in English.

The movie was the highest grossing film for Tarantino until “Django Unchained” was released in 2013. At the 67th Golden Globe Awards in 2010, the film was nominated for Best Motion Picture, Best Director and Best Screenplay. While the film did not win those categories, it got recognition for its cinematic value. Christoph Waltz received Best Supporting Actor awards from both the Golden Globes and Academy Awards.

“Minari,” a film about the life of a Korean immigrant family in the United States, was released on March 3 in Korea. The film won the Golden Globe Award for Best Foreign Film on February 28. Since it premiered at the Sundance Film Festival, Minari has received dozens of awards and critical acclaim. So many anticipated the Golden Globe win.

But some regrets remain as it was categorized as a foreign language film due to the Korean language spoken in the movie and was excluded from the Best Motion Picture category. The movie was directed by Korean-American filmmaker Lee Isaac Chung and produced by an American production company.

Even in the United States, many criticized the Hollywood Foreign Press Association (HFPA), which runs the Golden Globes. The rule that films with more than 50 percent of the dialogue in languages other than English must be considered foreign language films was ignored for Tarantino’s movie and strictly applied to Minari. Unless the HFPA considered German or French as variations on English, Tarantino’s film should have been categorized as a foreign language film.

Director Chung didn’t respond to the controversy. His gentle acceptance speech made the narrow-minded hosts embarrassed. “Minari is about a family. It’s a family trying to learn to speak a language of its own. It goes deeper than any American language and any foreign language. It’s a language of the heart, and I’m trying to learn it myself and to pass it on, and I hope we’ll all learn how to speak this language of love to each other, especially this year.” He is asking audiences to listen to the message, not the language spoken in the film. It also means that if you are prejudiced, you can’t hear the language of the heart. His message goes to a world beyond the screen.