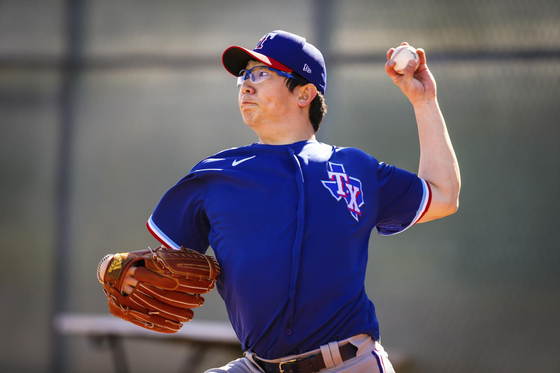 Yang Hyeon-jong, a left-handed pitcher who is participating in the Texas Rangers' spring training, throws a ball in the bullpen on Feb. 26, three days after joining the spring training. [YONHAP]

Yang is scheduled to pitch one inning for the Texas Rangers on Sunday, at 5:05 a.m. Monday Korean Standard Time, versus the Los Angeles Dodgers at Surprise Stadium in Surprise, Arizona.

According to the pitching schedule, Mike Foltynewicz will start against the Dodgers for two innings, while Dane Dunning and Kyle Cody are scheduled to follow Folynewicz for two innings. Yang and Jordan Lyles will take the mound after and pitch one inning each.

Yang signed a one-year split contract with the Rangers last month, which calls for a player to earn different salaries in the majors and Minor League.

Yang joined spring training only on Feb. 24 due to visa issues. He pitched two bullpen sessions on Feb. 26 and March 1, and pitched live for the first time on March 4.

The exhibition game is his chance to prove his ability.