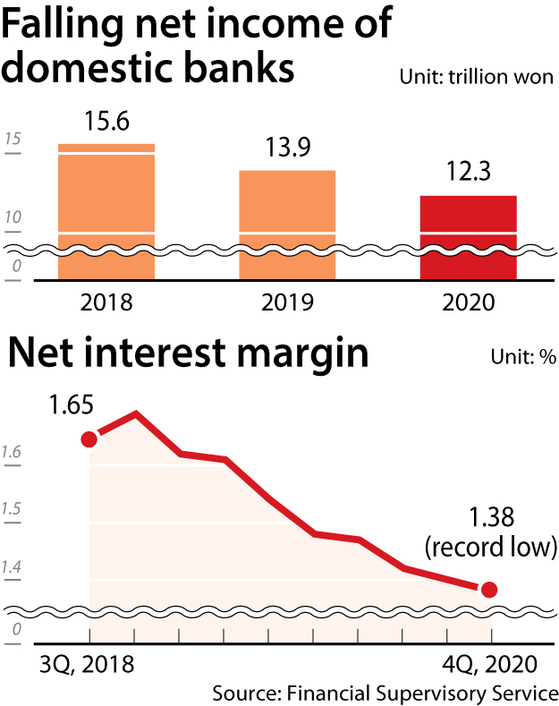 The net income of domestic banks declined 11.5 percent last year to 12.3 trillion won ($10.9 billion), according to preliminary earnings data of 19 banks, including internet-only banks, provided by the Financial Supervisory Service (FSS) on Monday.

Interest and non-interest income both increased in 2020, however large provisions for loan losses related to the coronavirus pandemic, dragged down net income.

With a record-low 0.5 percent base rate since May last year, banks have been struggling to increase their net interest margin, which essentially serves as a profitability ratio for banks. The margin is the difference between the interest income generated and the amount of interest paid out relative to total interest-earning assets.

Earnings related to securities and foreign exchange derivatives increased largely due to fall in interest rates and volatility in exchange rates, the FSS said.

Earnings from trust products fell as banks struggled to sell these products after a financial scandal related to derivative-linked funds that involved huge losses for investors who subscribed to some risky fund products without properly being warned of the dangers.

Financial regulators restricted banks from selling some trust products deemed highly-risky at the end of 2019 as a remedy to the scandal.

Loan-loss provisions increased by 88.7 percent to 7 trillion won in 2020 as domestic banks provisioned for bad debt in the wake of the Covid-19.

Households and small businesses borrowed a lot last year as they were affected by the pandemic and encouraged by low interest rates.