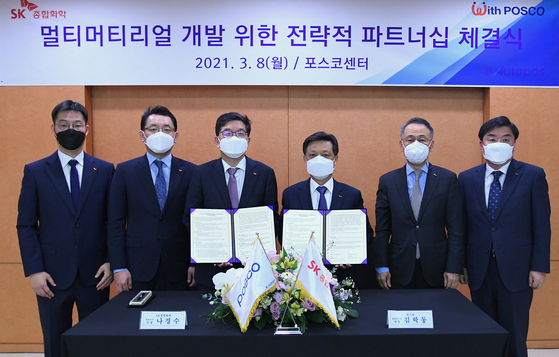 
SK Global Chemical plans to work with steelmaker Posco to jointly develop a new material for use in electric car batteries.


SK Global Chemical, a subsidiary of SK Innovation, on Monday announced it has signed a memorandum of understanding with the steelmaker to jointly develop a light new material for cars, which is “the key for the future of mobility, including electric vehicles.”

The material, to be used in electric car battery packs, will be based on a steel and plastic composite.


Posco “will prepare for the era of eco-friendly electric vehicles based on not just the development of steel-based auto parts, but also through a joint development with other materials like plastics,” said Posco President Kim Hag-dong at the Monday event held at Posco Center in Daechi-dong, southern Seoul.

The company plans to “further cooperate with SK Global Chemical to develop a solution that could maximize the strengths of both firms,” he added.

“The development of a new material for cars is expected to speed up in time for future cars based on the synergy effects generated from the two companies that produce and process chemical and steel materials,” said Na Kyung-soo, president of SK Global Chemical. “SK Global Chemical plans to cooperate with Posco in various fields, starting with the light material for cars.”