Large companies in Korea are scrambling to appoint women board members ahead of a revision in the capital markets law and due to pressure from foreign investors.

A revision of Financial Investment Services and Capital Markets Act will require Korean companies to have at least one woman on their boards. The law will apply to all listed Korean companies with assets of 2 trillion won ($1.77 billion) or more. The revision is designed to prevent companies from having men-only boards and to help increase the number of women in positions of power.

The amendment, which was passed in early 2020, is set to go into effect in August next year.

SK Holdings announced recently that it is planning to vote on the appointing of Kim Seon-hee, CEO of Maeil Dairies, as an outside director during a general shareholder's meeting scheduled to be held on March 29. Kim, the first female CEO in the local dairy industry, has been running the company since 2014.

“Kim acquired experience and considerable expertise while she contributed in increasing the market value of Maeil Dairies,” said a spokesperson for SK Holdings. “Based on her understanding of women in the same age group, we anticipate that Kim will contribute to strengthening the company’s communication skills.”

It's the first attempt by SK Holdings to appoint a female board member since 2015.

LG Corp. will vote on the appointment of Lee Soo-young, CEO of Eco Management Korea Holdings, as an outside director on March 26.

LG Electronics, LG U+, LG Hausys and GIIR are all aiming to appoint at least one outside female director by the end of the year. LG Chem, LG Household and Healthcare, LG Display and LG Innotek are aiming for the same in 2022.

Hyundai Motor said it is expected to appoint Lee Ji-yun, an associate professor at KAIST's Aerospace Engineering department, as an outside director. Hyundai Mobis, Hyundai Glovis and Hyundai Steel recently confirmed female candidates for board positions.

SK Telecom is planning to reappoint Yoon Young-min, a media and communication professor at Korea University, as its outside director during a meeting on March 25.

In terms of the ratio of women on boards, Korean companies fall far behind foreign companies.

According to CEO Score, a corporate management information provider, of 147 large Korean companies with assets of more than 2 trillion won, only 31 percent, or 46 companies, have one or more women on their boards.

Among Korea’s 100 largest companies, roughly 70 companies have no female directors, according to a report published by Unico Search, a global headhunting firm. 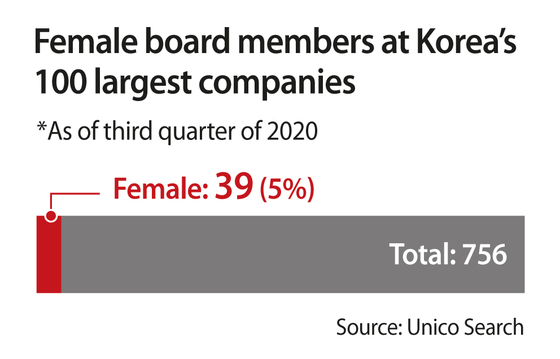 There are a total of 756 board members in those 100 companies, and of them, only 5 percent are women. In particular, 47 board members at Korea’s five largest companies—Samsung Electronics, Hyundai Motor, SK Holdings, LG and Lotte--only two are currently women.

The average ratio of women board members to total for foreign global companies is some 21 percent as of 2019, according to a report by Credit Suisse Research Institute.

Korean companies want professionals who have expertise, such as professors, people in legal professions and former public officials, but they argue that it’s not easy to find suitable talent.

“Companies who failed to find suitable talent, end up appointing people who are already serving as outside directors for other companies,” said a source from a big company.

In 2018, BlackRock, the world’s largest asset manager, announced that the company would not make any investment into companies that do not have at least two female directors on their boards.

However, according to a report by Ministry of Gender Equality and Family, of 2,072 listed Korean companies, only three Korean companies have over 40 percent of their board members as women: Clio at 71 percent, Bonne at 50 percent and Handsome at 42 percent.

“As part of efforts to achieve ESG initiatives, gender diversity [in boards] has become a key issue in attracting investment,” said Hong Ji-yeun, senior researcher at Korea Capital Market Institute. “To increase the value of companies, securing women talent is urgently needed at the moment.”

Corporate boards lack women ahead of law requiring them

AmorePacific tops the chart in terms of female employees