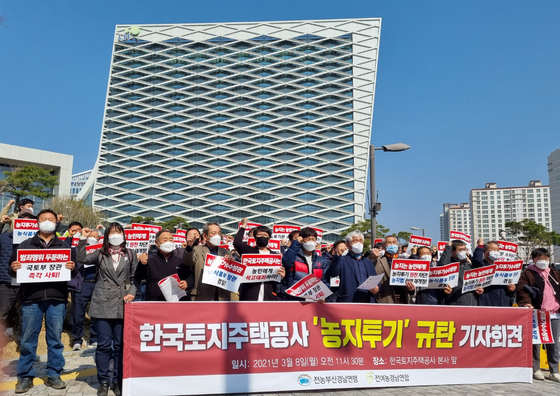 Members of the National Farmers' League protest purchases by LH employees of agricultural land outside of the company's headquarters in Jinju, South Gyeongsang on Monday. [YONHAP]


Prime Minister Chung Sye-kyun on Monday ordered the establishment of a special joint investigative task force to work with the National Tax Service and the Financial Services Commission to examine allegations of illegal property sales and acquisition by officials at the publicly-owned Korea Land and Housing Corp. (LH) and related parties.

In a meeting at the central government complex in Seoul with Nam Goo-jun, chief of the police's National Investigation Headquarters, Chung called LH employees accused of purchasing land on the site of a planned 70,000-unit public housing development as having “violated the spirit of the public housing corporation” and “betrayed the people.”

The probe comes on the heels of accusations made on March 2 by two civic groups –– the People's Solidarity for Participatory Democracy (PSPD) and Lawyers for a Democratic Society (Minbyun) –– that LH employees purchased land in Gwangmyeong-Siheung, Gyeonggi, ahead of an announcement by the Land Ministry that the site would be developed into the latest New Town.

They are accused of buying 23,000 square meters (5.7 acres) of land for roughly 10 billion won ($8.9 million). Family members, including spouses, were used as intermediaries to buy the land, the civic groups claim.

The civic groups argue that the properties were not simply purchased as investments, but as part of coordinated efforts to take advantage of insider information, pointing to massive loans totaling 5.8 billion won taken out by employees as a sign they were confident that the land would be purchased by the government and used for redevelopment.

Responding to concerns that the probe is limited in its ability to unmask land purchases conducted through third-party intermediaries –– such as family members –– and unregistered land resales, Chung emphasized the National Tax Service and the Financial Services Agency would thoroughly investigate all activities in the development area, including those which took place under the administration of former President Park Geun-Hye.

Chung also told Nam that the role of the police in the upcoming probe would be especially prominent following reforms which have relocated some investigative powers from the state prosecution service to police.

“Activities such as real estate speculation that affect public welfare fall under the jurisdiction of the police and will serve as a gauge of the police’s investigative capabilities,” Chung said.

“This is a test case to showcase the police’s new investigative capabilities to the public.”

The purchases highlighted by the civic groups were made between April 2018 and June this year, which partly overlaps with the time when Land Minister Byun Chang-heum headed LH. Byun served as the head of the state-owned developer between April 2019 and December last year.