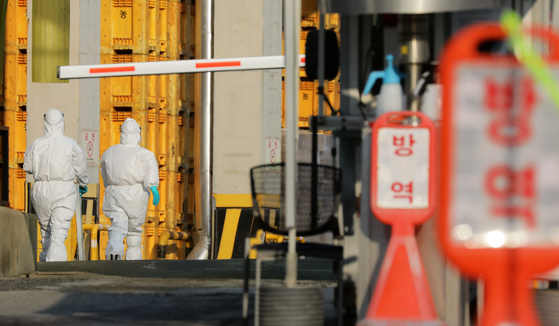 A livestock product joint market in Anseong, Gyeonggi, which has more than 570 workers, is linked to over 50 Covid-19 cases as of Monday. [NEWS1]


Eleven people died after getting Covid-19 inoculations as of Monday, according to health authorities, but medical experts concluded that the first eight deaths were not related to the jabs.

The Korea Disease Control and Prevention Agency (KDCA) said Monday that there were three more deaths of people after getting shots as of Sunday midnight since the country kicked off its nationwide coronavirus vaccination program at the end of last month.

A group of eight medical experts probed the first eight deaths and tentatively concluded Sunday that there was no causal link between the deaths and the vaccinations. The three latest deaths are currently under review.

The experts said that the eight deaths were determined not to be caused by anaphylaxis, or severe allergic reaction, and found through a review of the recipients of the vaccines at the same site, date and serial number, that there were no other serious adverse reactions.

Four of the bodies are undergoing autopsies at the National Forensic Service.

There are 3,915 people who reported reactions after the shots, though most are mild, such as headaches or fever.

Korea reported 346 new Covid-19 cases, including 335 local infections, raising the total to 92,817 as of Sunday midnight, according to the KDCA Monday. 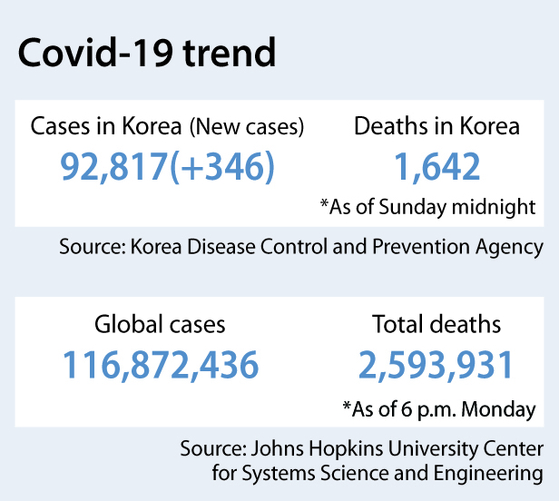 There were eight more fatalities, raising total deaths to 1,642.

While cases were down compared to 418 cases Friday and 416 on Saturday, fewer people are tested on weekends, and health authorities are on alert for a possible uptick in cases from more transmissible overseas variants and more mobility with the start of the new school semester.

There were 11 new imported cases from countries including the United States, Vietnam, Indonesia, Vietnam, Russia, Poland and Nigeria.

Korea confirmed 20 new cases of variants from overseas thought to be more transmissible, bringing the total to 182, according to the KDCA Monday.

Nine of the latest variant cases, all Koreans, were local infections, and 11 were imported.

So far, 154 cases are of the variant from Britain, 21 of the South African variant and seven of the Brazilian.

All travelers arriving in Korea are required to show negative polymerase chain reaction (PCR) test results taken within 72 hours of their departure.

Of new local infections, 97 were reported in Seoul, 128 in Gyeonggi and 15 in Incheon, while outside of the metropolitan area, 20 cases were in North Chungcheong, 14 in Gwangju and 12 in Busan.

The new school year kicked off last week, and there is an uptick in student infections.

A high school in Gangdong district is linked with 15 Covid-19 infections in students after the first patient was confirmed Friday.

Over 50 people working at a livestock market in Anseong, Gyeonggi, which has more than 570 workers, were confirmed Covid-19 positive as of Monday. After two people were found Covid-19 positive Saturday, a mass testing was held at the site. Social distancing is difficult for workers at the slaughterhouse. At least 21 infected were foreign workers who live together in a nearby dorm.

A cluster of foreign residents infected in Dongducheon, Gyeonggi, has increased to 151 cases as of Monday.