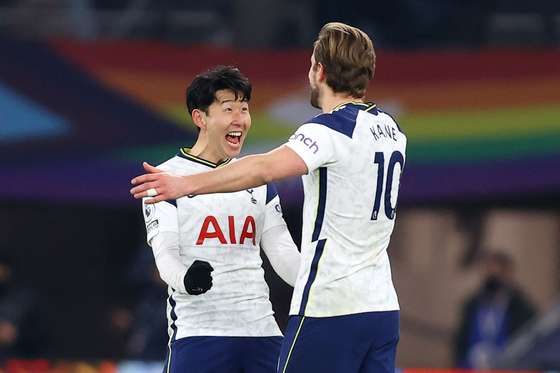 
Son Heung-min and Harry Kane of Tottenham Hotspur are officially the most prolific goal-scoring duo in a single season in English Premier League history, combining for their 14th goal during Spurs' 4-1 win over Crystal Palace on Sunday.

Spurs romped to a comfortable win at Tottenham Hotspur Stadium in London on Sunday, with both captain Kane and Gareth Bale picking up two goals each.

Bale opened the scoring in the 25th minute, slotting home a pass from Kane in an unguarded corner of the net. Christian Benteke equalized for Palace in the dying seconds of the first half, taking the score to 1-1 at the break.

It was Bale, again assisted by Kane, who added Spurs' second goal in the 49th minute, with Kane adding one of his own in the 52nd minute. Spurs' victory was all but secured with the score at 3-1 when a Son cross found Kane's head to bounce into the goal and make the score 4-1, a decisive victory for Tottenham and enough to put Son and Kane's names into the Premier League record books.

"They were good goals," Tottenham manager Jose Mourinho said after the match. "Harry Kane's first one was magnificent. We played good football."

Spurs had fallen into a bit of a rut at the start of the year, losing a string of big games and taking a tumble down the league table. The start of March saw things turn around, although so far the London club has faced fairly easy opposition from Palace, Fulham and Burnley.

Things definitely picked up against Palace, with Spurs' fourth goal of the match their 100th across all competitions this season, only the second team in Europe's big five teams to reach the milestone, after Bayern Munich.

Mourinho credited the turn around in Sunday's match to Palace's equalizer in the first half.

"It looks silly to say but I'm happy with the goal we conceded," Mourinho said. "My feeling in the 10 minutes of the first half was that if we finished 1-0 then maybe we would start the second half the same way. We lost a little bit of the hunger and desire to attack. We were too passive, we were in control. We made one mistake and conceded a goal. So I had a positive feeling when we conceded.

"It was a good week for us — three matches, nine points, no injuries and everyone is coming back. We are in a positive moment."

It was definitely a good week for Son and Kane.

With 14 goals scored by the dynamic duo this season, Son and Kane have now broken the long-standing Premier League record held by Alan Shearer and Chris Sutton, who scored 13 goals for Blackburn Rovers in the 1994 to 1995 season.

With that record firmly broken, Son and Kane could now be only a few games away from officially becoming the greatest goal-scoring duo the Premier League has ever seen. The pair have now combined on 34 goals in total throughout their five years playing for Spurs together, making them the second-most prolific goal-scoring partnership of all time.

With 34 goals, Son and Kane are now only three goals away from overtaking the all-time top goal-scoring duo, Didier Drogba and Frank Lampard, who combined on 36 goals during their time playing for Chelsea.

On their route to the top, Son and Kane have already overtaken some of the biggest names in Premier League history.

Tottenham will be back in action on Thursday for the first leg of their Europa League Round of 16 clash with Dinamo Zagreb at home. They will return to Premier League action next Sunday, facing London rivals Arsenal away at Emirates Stadium.