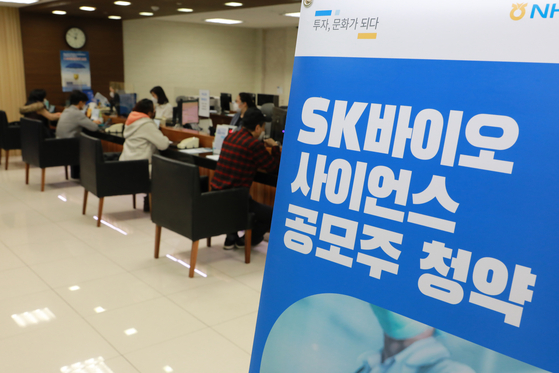 Individual investors on Tuesday at the Myeong-dong branch of NH Investment & Securities in central Seoul place orders for shares in the public offering of SK Bioscience. [NH INVESTMENT & SECURITIES]


SK Bioscience attracted some 14.15 trillion won ($12.4 billion) of deposits on the first day of retail book building Tuesday for an oversubscription rate of 75.87 times.

That means that an investor would have to put at least 2.5 million won on deposit to get a single share of the soon-to-be public company, which is being sold at 65,000 won a share.

Oversubscription in and of itself is not meaningful and is not a good indication of future performance. It suggests that the offering was mispriced by the underwriters, as they could have priced the shares higher to better match demand.

NH Investment & Securities, one of six brokerage houses handling the shares, said Tuesday a total of 5.7 trillion won has been put on deposit for a subscription rate of 1 to 82.4.

Korea Investment & Securities, which is handling 1.32 million shares, received 3.4 trillion won of deposits on Tuesday, for an oversubscription rate of 78.2 times.

At Samsung Securities and Hana Financial Investment, who are handling only some 287,000 shares each, the oversubscription rate was 1 to 154.1 and 1 to 66.1, respectively.

The amount of money SK Bioscience generated is far above the record held by the SK Biopharmaceuticals IPO last year, which attracted some 5.9 trillion won of deposits on its first day of book building. The figure rose the second day to 30.9 trillion won.

The drug maker aims to raise some 1.5 trillion won through the share sale. The newly raised funds will be used to fortify the company’s investment in facilities and research and development (R&D) projects.

During a two-day book building for institutional investors held March 4 to March 5, its shares were oversubscribed by 1,275.47 times, the highest-ever competition rate for a Kospi IPO.

A total of 1,464 institutional investors participated in the book-building process, according to the company's regulatory filing, of which 292 were foreign investors.

SK Bioscience has also been developing its own coronavirus vaccines--  NBP2001 and GBP510—which are currently undergoing Phase 1 clinical trials. SK Bioscience’s vaccine candidate was selected to receive $10 million in funding from the Coalition for Epidemic Preparedness Innovations in early December.

The drug maker posted 158 billion won in revenue during January-to-September period last year, with an operating profit of 26.8 billion won.

SK Bioscience is the first big-name IPO after Financial Services Commission revised the allocation method. To give equal opportunities for all subscribers who deposit a minimum amount, some half of shares available for retail investors will be allocated in the same amount, regardless of the amount of deposits.

SK Bioscience is set to make its debut on March 18.