Kim Cheon-seong, CEO of the Rollinghall music venue in western Seoul's Hongdae neighborhood, had a smile on his face the entire time he was explaining how the #saveourstages festival was put together, thanking the staff, C.O.D.E. Korea and the artists for participating in the event dedicated to resuscitating the virus-stricken indie venues. It was when he was asked what his plans were for the rest of this year was, that he couldn’t hold back his tears.

“I was going to shut down the Rollinghall, I really was,” he said. “I feel so grateful. I feel indebted to the musicians and everyone else. There were other venues that could not participate due to expenses, and I feel sorry for them. I don’t think I will ever be able to forget this.”

The #saveourstages online music festival kicked off on Monday with the goal of saving Seoul’s small-sized indie music stage venues by holding concerts at five different venues in Hongdae. Featuring a whopping 67 acts from diverse genres of Korean music, #saveourstages runs until Sunday, giving fans, musicians and music venues a chance to come together and tackle the coronavirus crisis which has hit the indie music scene particularly hard. 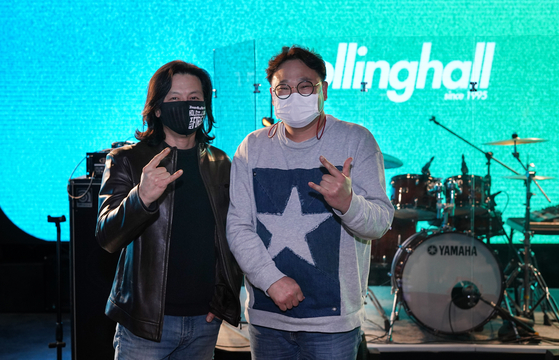 Lee Sung-soo of HarryBigButton, left, and Kim Cheon-seong, CEO of Rollinghall, stand for photos on the Rollinghall stage after an interview with the Korea JoongAng Daily on Monday. [JEON TAE-GYU]


The artists will take to stages at five different venues — Rollinghall, West Bridge, Prism Hall, Radio Gaga and Dream Hall — each for around 40 minutes and all at different times, so viewers can toggle through each live stream session on Presented Live.

Hongdae’s small-sized music venues and clubs have been dying silently amid Covid-19. Kim, who opened the Rollinghall’s predecessor Rolling Stones in 1995, has witnessed the many hardships that the indie music scene has endured over the years, such as the 1990s’ economic crisis and the MERS pandemic. But he says the situation has never been this dire, where it's become impossible to hold performances because the cost of hosting a show cannot be recovered due to restrictions that mean only a limited amount of tickets can be sold. 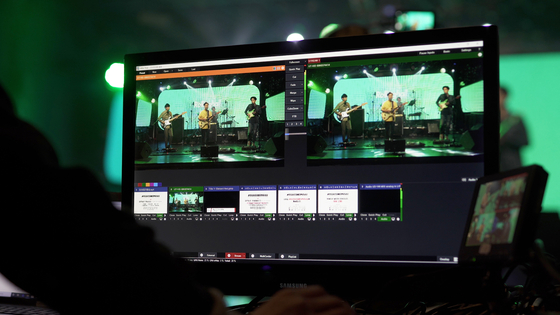 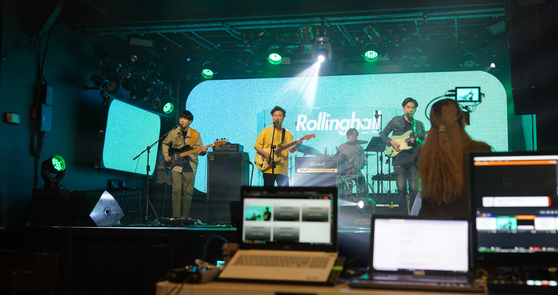 
“We tried holding online shows, but each time we did, we ended up with more debt,” Kim said. “Even for me, watching the performances held at Rollinghall [online] just felt like watching a TV show for two hours. Many of the artists that we host here live off the real and tangible energy they get while performing on stage — they run around the stage sweating and the fans come to see that in person and communicate. So after finding out that we’re just going to end up with more debt, we decided not to hold any shows.”

The Rollinghall held no shows at all from March to May last year, had a handful in the summer but none from November. It was supposed to celebrate its 25th birthday last year, which staff had been so eager for that they began making preparations from the summer of 2019, but all those plans came crashing down when the situation became so dire that Kim was paying for the staff's salary out of his own pocket.

“I’ve taken out so many loans that there’s nowhere that will lend me money,” he said. “But it’s not just me, or just the live venues. Everyone in the arts field such as festival organizers, artists, directors, light directors, sound technicians — everyone in this live music field is suffering.”

That’s what moved Kim to come together with other live venues around the Hongdae area to form the Korea Live Hall Association and request both the government and the public take more interest in the dying industry. Live club Evans Lounge closed its doors in early January after running for nine years in Seogyo-dong, western Seoul, as well as Muv Hall, Queen Live Hall and DGBD. V Hall, a major concert venue in Hongdae that has been running for 14 years, also shut down. Rollinghall was on the verge of closing its doors in January. 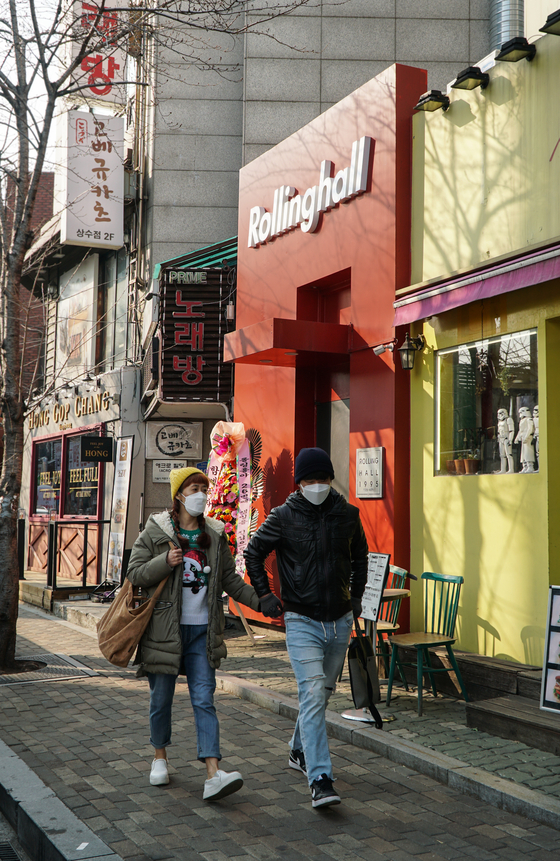 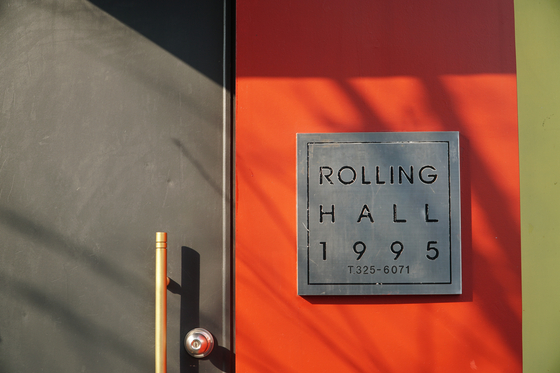 The Rollinghall in Hongdae, western Seoul, is one of the oldest indie venues in Korea and is symbolic of the Korean indie music scene. [JEON TAE-GYU]


According to the Record Label Industry Association of Korea, 416 concerts were canceled between February and December last year in western Seoul's Hongdae, a neighborhood well-known as the heart of indie music for both producers and artists. The fiscal damage amounts to 2 billion won's ($1.8 million) worth in total, just in the cost of unsold tickets. Along with rental fees and maintenance fees, that figure is likely to be much higher.

Seeing one venue after another shut and artist after artist give up on their dreams, Lee Sung-soo, the vocalist of rock band HarryBigButton, began the #saveourstagesproject with C.O.D.E. Korea’s President, lawyer Yoon Jong-soo. It began as a post on Lee’s Facebook lamenting the silent death of Hongdae. Yoon saw the post and offered his legal knowledge and network to put together an online festival, to rent out the venues for a whole week and fill them with artists who were willing to perform at a discounted rate. Artists not only agreed, but some also offered to play for free and others even made personal donations to the campaign.

The sponsorships and ticket sales will go to renting out the venues and whatever is left will go to a fund to help indie venues in the future. Online streaming platform Presented Live offered their services for free.

“There was only a very small number of online performances artists could hold last year,” Lee said. “It’s funny to put it this way, but musicians were practically ‘unemployed.’ Artists need to perform to make money, which they then use to make new music. A person has to be ensured a certain level of living to create something.” 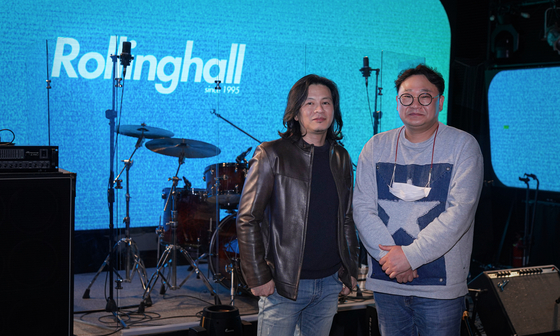 Lee Sung-soo of HarryBigButton, left, and Kim Cheon-seong, CEO of Rollinghall stand for photos on the Rollinghall stage after an interview with the Korea JoongAng Daily on Monday. [JEON TAE-GYU] 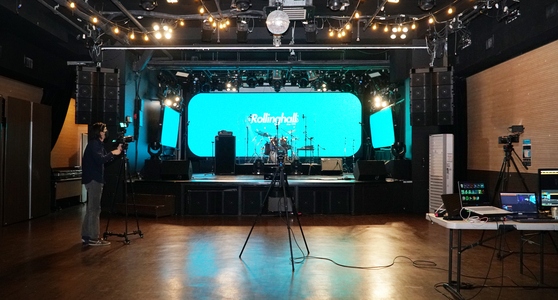 
When Lee called around to ask whether musicians he knew would like to perform, he said that some told him they couldn’t take part because they had ‘found other paths.’ Their new occupations wouldn’t allow them to take time away to practice or perform.

“Performances allow musicians to exist and also allows the audience to come together with the artists,” Lee said. “And not only that, but the staff members as well. They all become one because the stage has that magic.”

In fact, Yoon said that the campaign is meant to not only give concert venues a little room to breathe, but to raise overall awareness of the indie music scene and its passionate denizens. Many people think of the Hongdae neighborhood as just a reckless drinking corner and that “real” arts only include classical music concerts or plays — this sentiment is what ails the indie and popular music scene even more, he said.

“People went crazy over [JTBC’s music show] ‘Sing Again’ [which featured many ‘nameless’ indie musicians] and asked, ‘Where have they all been all these years?’” said Yoon. “Well, this is where they have been, performing in small venues in Hongdae. Isn’t it so contradictory that people would cheer for them but not cheer for the indie scene? I wanted to help stage live performances to just hold on until the pandemic ends, but I also hope that this is the chance for people to become more aware and hospitable toward the indie scene.” 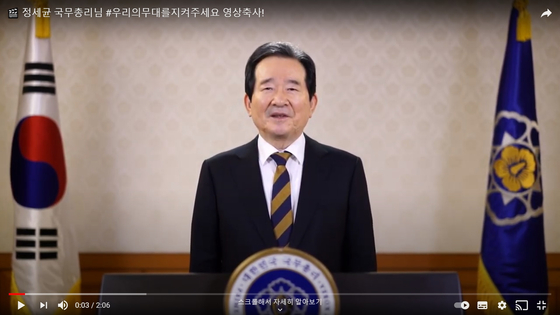 Prime Minister Chung Sye-kyun sent a congratulatory message to the organizers and participants of the #saveourstages festival on Monday. [SCREEN CAPTURE]


Heeding the call, Prime Minister Chung Sye-kyun sent a congratulatory message to the festival’s organizers and participating artists on Monday morning, the “kind of attention that we need,” according to Yoon. Rollinghall CEO Kim requested that the government conducts a thorough survey into the damage suffered by the pop music scene, which can be used to assess exactly what kind of measures need to be taken. And as the most urgent and immediate remedy, Yoon asked that the government start by paying artists’ stage rental fees.

“That way, the venues can survive and the artists can take whatever income is made from ticket sales,” said Yoon. “It might not be much, but at least it will keep them alive until the pandemic ends. Right now, the indie scene doesn’t receive the necessary support because it doesn’t count as ‘art’ in the minds of the people making the policies. People think that it’s only art if it’s something held at the Sejong Center for Performing Arts [central Seoul] or performed by BTS. What people don’t realize is that there are small stages in Hongdae where people come to cheer each other on and share energy with each other.”