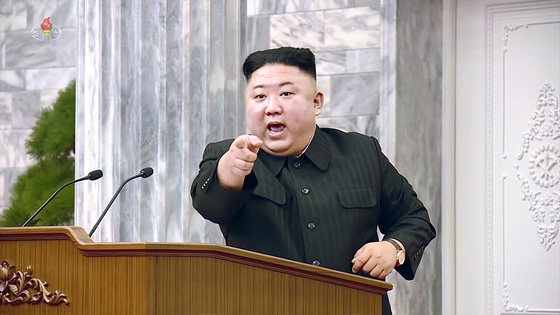 North Korean leader Kim Jong-un presides over a meeting of the Central Committee of the ruling Workers' Party in Pyongyang on Feb. 11, discussing details of a new five-year economic development plan in a capture from the North’s Korean Central Television. [YONHAP]


North Korean officials blamed themselves for poor economic development in pieces carried in state media Tuesday, following leader Kim Jong-un’s rare admittance of failures in his country’s economic plans at the beginning of the year.

The North’s official Rodong Sinmun carried a contribution Tuesday by Jo Yong-dok, a department director of the North Korean cabinet, that said production was hindered by a lack of cooperation among economic sectors including the metal, electricity, coal and transportation industries last year.

“The responsibility rests with the cabinet members,” Jo wrote, adding that such an outcome could have been avoided “if we boldly carried out projects to overcome economic difficulties with resolution.”


Other officials blamed their own decisions for underproduction in similar pieces carried in the state newspaper Tuesday.

Choe Yong-il, a senior official at the Sunchon Area Youth Coal Mining Complex in South Pyongan Province, said in a contribution that he made the mistake of setting unrealistic goals and overestimating the company's mining capacity.

Choe wrote that they had initially been confident of its mining capacity “but the results are clear.”

Kim Yong-chol, a manager at the Pukchang Thermal Power Plant, blamed himself for power disruptions.

Leader Kim admitted to a failure of his previous economic development plan in a rare ruling Workers’ Party Congress in January while pushing for a new five-year strategy with a focus on "self-reliance."


Kim said in a speech to the Workers’ Party’s Eighth Congress on Jan. 5 that the “five-year economic development plan has fallen greatly short of its goals in almost all sectors.”


In February, Kim fired a senior economic affairs official he appointed only a month earlier, Kim Tu-il, for failing to come up with new ideas to save the economy. O Su-yong, a former vice premier and veteran economic policymaker, was appointed the new director of the Central Committee’s Department of Economic Affairs.

North Korea has suffered economically from the pandemic after it closed its borders early last year to prevent the spread of Covid-19, as well as from sanctions implemented by the United States and the international community. UN Security Council sanctions resolutions since 2017 have banned major North Korean exports include coal, iron ore and textiles.

Kim failed to reach a deal with the Donald Trump administration in summit talks in 2019 for sanctions relief in exchange for denuclearization steps, leading to an impasse in North-U.S. negotiations.


The chief secretaries of city and county Workers’ Party committees expressed a determination to improve upon the North Korean people's standard of living, reported the Rodong Sinmun Sunday. There was also discussion of establishing a more unified leadership system under the Central Committee.


Pyongyang has so far remained mum on Seoul and Washington’s springtime military exercises that kicked off Monday and are set to run through March 18. The computer-simulated training is scaled down compared to previous years and will not include outdoor maneuvers.

North Korea views such joint drills as war rehearsals and vehemently protests them.


In an interview with local media outlet Tongil News, Unification Minister Lee In-young said it is “desirable for inter-Korean dialogue to resume in the first half of this year.”

He noted that the springtime military exercises are “being carried out in a flexible and scaled-back manner” and that North Korea responding too sensitively could bring about adverse effects for negotiations with the United States as the Joe Biden administration is in the midst of a policy review for North Korea.


“If the military exercise brings about tension, it could rather bring about strategic disregard from the United States or a hard-line attitude,” said Lee.