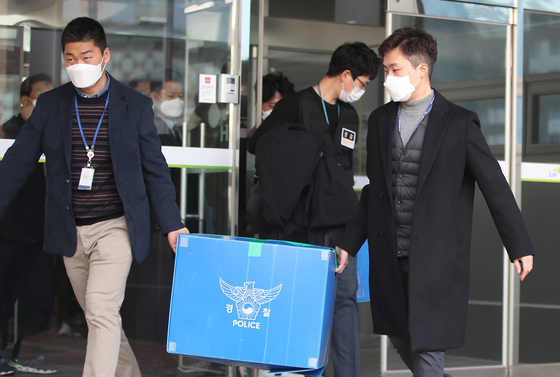 Detectives from the Gyeonggi Nambu provincial police conduct a search-and-seizure operation at LH's offices in Gwangmyeong, Gyeonggi on Tuesday. [NEWS1]

In a massive raid that began at 9:30 a.m., sixty-seven detectives from the corruption and economic crime investigative unit of the Gyeonggi Nambu provincial police descended on the state-run company’s Jinju headquarters.

The operation took place seven days after civic groups first accused LH employees of using inside information about the location of the Gwangmyeong-Siheung New Town development to buy land in the area.

LH’s Gwacheon and Incheon offices –– the latter of which manages the New Town development in Gwangmyeong-Siheung –– were also subject to search-and-seizure operations, along with the homes of 13 employees accused of engaging in land purchases. The employees were also slapped with travel bans. Two other former employees are also under investigation, but they were not raided.


Although Prime Minister Chung Sye-kyun on Monday announced a special joint investigative task force in tandem with the National Tax Service and the Financial Services Commission to look into the scandal, concerns arose almost immediately about whether that was enough.

Following President Moon Jae-in’s directive that the investigation proceed in parallel with questioning of current and former employees of LH, a source within the task force who spoke on the condition of anonymity criticized the approach, saying, “An investigation alone –– without questioning –– is the quickest way to secure as much evidence as possible.

According to materials submitted to the National Assembly by the Land Ministry regarding the scandal, 12 employees of the Land Ministry and LH have already refused to submit to requests from the team conducting the parallel questioning process to use their personal information.

However, 13 employees who were already publicly named by the civic groups that first raised the allegations have signed information-sharing agreements with that team.

Regarding the government’s plan to expand the probe to the period when the Park Geun-hye administration was in power, the source added, “It is more correct to thoroughly investigate recent allegations first, where the chances of evidence destruction are lower, and then to expand the scope of the probe.”

Even as police began collecting evidence on Tuesday, concerns have arisen over institutional shortcomings in the probe resulting from the recent adjustment of investigative powers between police and prosecutors, enacted into law last year.

Former Prosecutor-General Yoon Seok-youl, who resigned his post following the announcement of a bill by the ruling Democratic Party to strip the state prosecution service of its remaining investigative powers, lamented the pace of the ongoing probe and the prosecution’s already reduced involvement in investigations into cases such as the LH scandal.

“The Land Ministry must not be given time to destroy evidence. A thorough and immediate investigation must be launched,” Yoon said in an interview with the JoongAng Ilbo on March 6.

“In the past, the state prosecution service would have already directed an investigation into such a scandal,” Yoon said. “Unlike the Prime Minister’s Office or the Land Ministry, we would not have started a probe by conducting an exhaustive survey by asking employees at LH if they have or have not bought land. That sort of questioning is pointless.”

Explaining why the search-and-seizure operation commenced seven days after the allegations were first raised and six days after a formal criminal complaint was filed regarding three of the accused LH employees, police said they applied for a search warrant from the state prosecution service on Friday, which was issued on Monday after a weekend review by the judiciary.

While prosecutors have voiced their dismay over the investigation’s progress, members of the Moon administration expressed hopes that the case will cast a positive light on the police’s investigative prowess.

“This is a test case to showcase the police’s new investigative capabilities to the public.”

The government plans to announce the results of preliminary questioning of 11 of the accused employees on March 11.