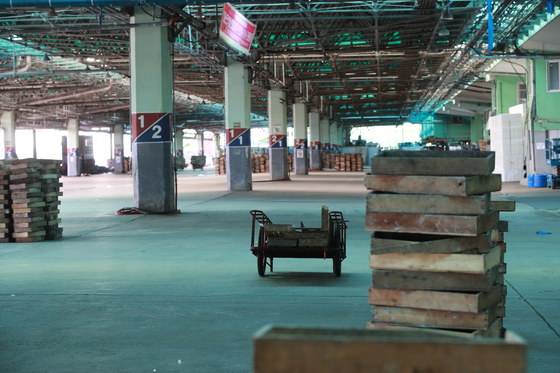 The Busan Cooperative Fish Market, the largest seafood distribution market in the country, is hauntingly empty Tuesday after more than a dozen Covid-19 infections were confirmed, leading auctions to be canceled that morning. [SONG BONG-GEUN]


A cluster of infections broke out at Korea's largest fish market, with at least 13 cases confirmed, as daily Covid-19 cases nationwide jumped back into the 400s.

The Busan Cooperative Fish Market, where over 30 percent of the country’s seafood comes from, reported its first coronavirus case Saturday, which led to infections in 10 other workers and three relatives, said Busan officials Tuesday.

At the fish market, which dates to 1963, workers unload seafood from trawlers and sort them before auctioning off the catches early in the morning.

So far, some 360 contacts of the patients have been traced and put into self-quarantine, taking out about a quarter of the market’s workforce and leaving it short of personnel.

An auction was not able to be held Tuesday morning, though small sales took place Monday.

Over the weekend, 10 fishing trawlers arrived at the Busan market but seven were forced to sail onto other ports including Dadaepo and Samcheonpo.

There are concerns of more infections as there are over 1,500 people affiliated with the Busan Federation of Port and Transport Workers’ Union, including 552 official union members and 974 temporary union members.

The fresh fish industry is vulnerable to disruptions as catches must be sold in a timely manner.

With the auction canceled Tuesday, 24 vessels could not unload fish. They had to quickly find other ports to unload some 50,000 boxes of mackerel and other fish estimated to be worth around 2 to 3 billion won, according to Busan fish market representatives.

In the past months, Busan saw infections of sailors and workers who unloaded catches from Russian fishing vessels.

Another cooperative market for livestock in Anseong, Gyeonggi, which has more than 570 workers, confirmed at least 77 Covid-19 cases as of Monday midnight, according to the Korea Disease Control and Prevention Agency (KDCA).

Beef and pork are handled at a slaughterhouse and auctioned at the Anseong cooperative market, the third largest for livestock in the country.

After two people were found Covid-19 positive Saturday, mass testing was done at the site. Infected patients include around two dozen foreign workers who live together in a nearby dorm. 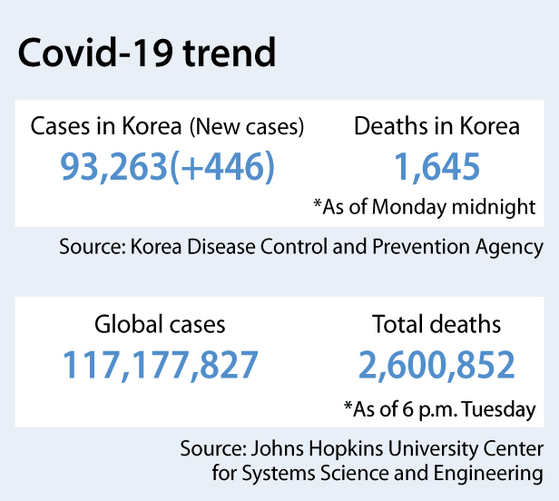 This marked a jump from 346 cases the previous day.

There were 19 new imported cases, amid concerns over overseas variants, including seven from the United States and two from Brazil.

Outside the greater Seoul area, 19 cases were reported in Busan, 14 in South Chungcheong, 13 in Gangwon and 11 in Ulsan.

Six people were reported to have been infected with Covid-19 after receiving vaccine shots, said the KDCA, including three medical professionals treating coronavirus patients who were inoculated with the Pfizer vaccine at the National Medical Center.

It could take at least two weeks for antibodies to be formed after vaccination, pointed out health authorities.

A total of 383,346 people have received their first AstraZeneca or Pfizer shots, said the KDCA, adding 64,111 new vaccinations as of Monday midnight.

There are now 4,851 people who reported adverse reactions after the shots, though most are mild, such as headaches or fever.

Health authorities said that Pfizer vaccines for 500,000 people, or 1 million doses, are expected to arrive later this month, with 500,000 doses arriving on March 22 and the other half to arrive on March 29.

An initial Pfizer batch for some 58,500 people delivered late last month came through the Covax Facility vaccine distribution mechanism. The next batch was directly bought by Korea.