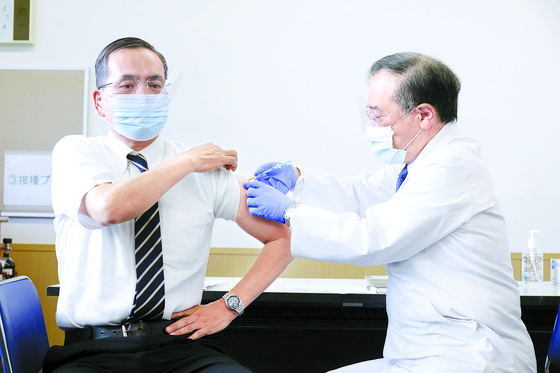 Lee Young-hee
The author is a Tokyo correspondent of the JoongAng Ilbo.

Short-tempered people need patience to live in Japan, but lately, I am very anxious. Japan’s Covid-19 vaccination proceeds so slowly that I wonder if it really began. Since inoculations began on Feb. 17, 46,469 people were vaccinated in the 17 days until March 5. To monitor potential side effects, 40,000 people were vaccinated first, and priority was given to medical staffers. But the speed is not increasing. Inoculations for the elderly — initially scheduled for early April and then delayed to April 12 — are now expected in late April.

Japan secured Covid-19 vaccines early on and agreed to purchase Pfizer, AstraZeneca and Moderna vaccines for 157 million people, more than its population. But as the Pfizer vaccine supply was delayed, Japan is forced to receive what Europe offers. As the exact supplies cannot be estimated, it is hard to plan. Then why not administer AstraZeneca and Moderna vaccines? That’s not possible. The two vaccines are not approved in Japan yet.

The Japanese government attributes the delay to a lack of supplies. But a bigger reason seems to be the complicated —and slow — approval process compared to other countries. To get approval, clinical trial on hundreds of Japanese people are required. That’s the main reason why Japan is more than two months behind the U.S. and Britain.

Clinical trial results on Japanese people also do not guarantee immediate approval. In Korea, AstraZeneca vaccines were approved in less than 40 days and the World Health Organization approved the use after four weeks. In Japan, approval for AstraZeneca was submitted on Feb. 5 and Moderna on March 5, but there is no progress. The health ministry said a second vaccine will be approved as early as May or June. The situation, in which vaccines are purchased but not administered, will continue for several more months.

Safety is important, but I wonder why no one is asking why Japan is taking so long on the approval process. Last week, I met with Professor Tatsuru Uchita, an emeritus professor at Kobe College, for an interview. He said that Japanese leaders today have no intention of changing anything and are only interested in maintaining the status quo.

In an unprecedented crisis, I fear this “consistency” of doing what they’ve been doing and not trying to change things. It’s unlikely, but some predict that at the current rate of vaccinations, it would take more than 10 years for Japan to reach herd immunity for Covid-19.