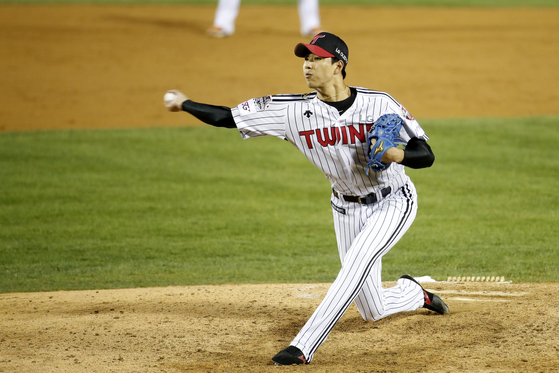 LG pitcher Jung Woo-young pitches in the first round of the 2020 KBO Wildcard series at Jamsil Baseball Stadium in southern Seoul on Nov. 2, 2020. [NEWS1]


LG Twins sidearm pitcher Jung Woo-young is working hard to bulk up to try and prevent possible injuries during the coming season.

Jung, drafted 15th in the second round in 2019, quickly became a core part of the Twins bullpen.

In his debut year, Jung posted a 3.72 ERA in 65 and one third innings with four wins, six losses and 16 holds, becoming the first Twins player to take home the KBO's Rookie of the Year award in 22 years since current batting coach Lee Byung-kyu in 1997.

Last year, Jung achieved even better results. With an ERA of 3.12 with four wins, four losses, five saves and 20 holds, Jung smashed right past the so-called "sophomore jinx." With Jung on the mound, the Twins advanced to the postseason for two consecutive years.

The 21-year-old renewed his contract this year with a salary of 181 million won ($158,000), up from last season's 80 million won, joining the hallowed ranks of the six-figure-income third-year players.

But despite his success so far, there are concerns over whether he can keep it up. For a middle reliever, Jung racks up a lot of innings and is often seen back on the mound in consecutive games.

At 193 centimeters (6 foot 3) and 80 kilograms (176 pounds), Jung is on the slender side for a pro baseball player. That lack of weight can affect both his performance on the field and his chance of injury.

"My ball speed is faster than my weight," said Jung. "If my weight is not enough, it can be too much."

After talking to LG trainer Kim Yong-il, formerly the personal trainer of Ryu Hyun-jin of the Toronto Blue Jays, Jung is looking to bulk up to 85kg and increase his muscle mass for the upcoming season.

"Woo-young doesn't weigh much considering his height," said Kim. "If he maintains his current body shape, he'll suffer from back pain as he is a sidearm pitcher."

Injuries have already been an issue. In Jung's debut season, he was excluded from the entry with a shoulder injury in mid-July, missing over a month of action.

Jung struggled both before and after the injury, an experience that took the shine off his Rookie of the Year award.

"The club is helping Jung avoid injury," Kim said. "It is important to strengthen the waist and lower body."

This season, the Twins' newly appointed manager Ryu Ji-hyun has emphasized the role of closer Go Woo-suk and Jung as a setup man.

During the offseason, Jung trained every day at Jamsil Baseball Stadium. As well as improving his own physical condition, Jung hopes to lead the Twins to a long-elusive KBO title and pick up the holds title along the way.

"I should do better this year," Jung said with a smile.