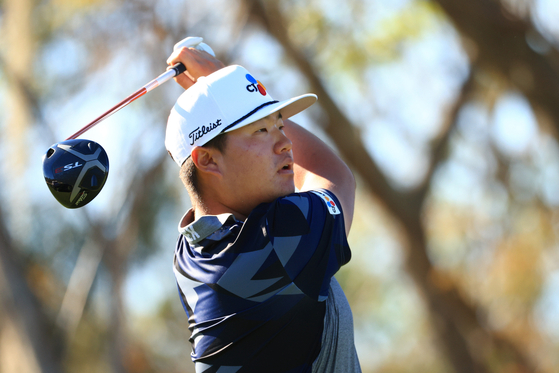 Im Sung-jae plays his shot from the third tee during the first round of the Arnold Palmer Invitational at the Bay Hill Club and Lodge in Orlando, Florida, on March 04. [GETTY IMAGES]


Korean golfer Im Sung-jae says its his goal to list the PGA Tour's The Players Championship trophy at least once in his career, and that chance could come this weekend at The Stadium Course at TPC Sawgrass in Florida.

Im, currently the top Asian golfer in the world at No. 17, will return to The Stadium Course on Thursday for this week's The Players Championship, a tournament the young Korean says is as important as any major.

Im missed his shot at The Players glory last year, when the event was canceled due to the coronavirus pandemic. This year he doesn't want to miss the opportunity.

“Everyone wants to produce their best performance at The Players," Im said ahead of the tournament. "It was a bit disappointing that it got cancelled last year but hopefully I can play all four rounds with great scores this time around."

If Im can come through this weekend, he will be the third Korean to win the tournament, after K.J. Choi in 2001 and Kim Si-woo in 2017. While Korean golfers tend to dominate on the LPGA Tour, PGA Tour golfers have often struggled to make a name for themselves. That two Koreans have already won The Players, Im says, means he could do well there.

"Two Korean players have won at TPC Sawgrass, which has made me think that the course actually fits well to Korean players," Im says. "I’ve got a feeling I can also compete for the top. When K.J. won The Players, I was young and I couldn’t watch the live broadcast. However I watched the re-run right away.”

At 22-years-old, Im has shot onto the PGA Tour in the 2018-19 season, winning Rookie of the Year. Over the last two years, Im went from strength to strength, picking up a win at the The Honda Classic in March last year, alongside a number of top 10 finishes and a second-place finish at the 2020 Masters Tournament.

“If I get to win The Players, it will definitely give me some pride," Im said. "I hope to compete well with the talented players but as you know, it is very hard to do that in every event. However, I want to hold that trophy for at least one time in my career.”

An Byeong-hun, Kim Si-woo, Kang Sung-hoon and Lee Kyoung-Hoon complete the roster of Korean golfers competing at the tournament from Thursday.