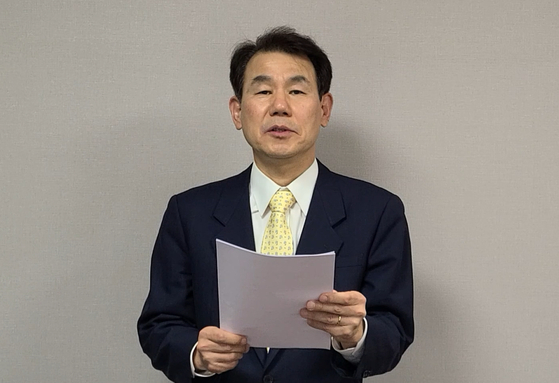 
Seoul and Washington agreed to a six-year defense cost-sharing deal, with Korea paying 1.1833 trillion won ($1.035 billion) in 2021, an unprecedented 13.9 percent increase from the previous year, the Ministry of Foreign Affairs revealed Wednesday.

Korea is expected to pay more over the next four years from 2022 to 2025 at a rate that mirrors increases in Seoul’s own defense spending compared to the previous year.

The two sides held nine rounds of talks since negotiations for the 11th Special Measures Agreement (SMA) kicked off in September 2019, only coming to agreement 18 months later.

Jeong Eun-bo, Korea's chief negotiator for the defense cost-sharing talks, and his U.S. counterpart from the Joe Biden administration, Donna Welton, reached a tentative agreement after talks last Friday to Sunday in Washington but didn’t immediately release details of the new deal.

The Foreign Ministry said Wednesday that the 13.9 percent increase for this year reflects a 7.4 percent hike in Korea’s defense budget in 2020 plus an additional 6.5 percent, which covers an increase in labor costs of Korean workers for the U.S. Forces Korea (USFK), which was an increase for a single year only.

A 5.4 percent increase is expected in Seoul’s contributions for 2022, which is in line with its defense budget increase next year.

According to the Korean Defense Ministry’s mid-term defense plans for 2021 to 2025, Seoul expects an average annual military budget increase rate of 6.1 percent. If this figure is applied to the annual increase for the SMA, Korea could expect to pay nearly 1.5 trillion won in 2025, in line with the Donald Trump administration’s demand of $1.3 billion annually.

“Through this agreement, we were able to contribute to the stable presence of the U.S. forces in Korea,” Jeong said in an online briefing Wednesday, adding that the agreement prevented the establishment of new categories meant to increase Seoul’s contributions and had been “negotiated based on principles and standards, not just cost.”

Seoul and Washington struggled to seal a military burden-sharing deal after Korea balked at the Trump administration’s initial demands of a fivefold hike in its contributions toward the cost of stationing some 28,500 American troops in the country, or nearly $5 billion per year.

A tentative agreement reached by the two negotiating teams in Los Angeles March last year was rejected by Trump, and U.S. negotiators pushed for Korea to pay 50 percent more than the previous year, or around $1.3 billion.

Negotiators from the Trump administration were reported to have demanded a fixed annual increase of 7 percent.

Korea has resisted accepting a fixed increase rate. However, the latest deal could be seen as a fixed rate since annual defense budget increases do not change drastically over several years. Analysts also point out that the deal does not put a ceiling on the annual growth rate.

The new agreement should also prevents Korean personnel for the USFK going on unpaid leave again, stipulating that labor costs to the previous year’s level can be paid even in the absence of a new deal after the previous one expires, according to the Foreign Ministry.

Such efforts, said the ministry, are “expected to contribute to enhancing the stability of employment and livelihoods of Korean workers as well as enhancing transparency in the execution of defense cost sharing.”

The failure to agree to a new accord last year resulted in an unprecedented furlough of 4,000 personnel, or around half the Koreans working for the USFK, last April. The two countries eventually agreed on a separate arrangement last June to enable Seoul to fund the labor costs of the Korean personnel through 2020, ending the two-month furlough.

“The two countries since the launch of the Biden administration are demonstrating an ironclad Korea-U.S. alliance by resolving key alliance issues smoothly at an early date,” said the Foreign Ministry in a statement.

The agreement, according to the ministry, is also “an opportunity to reaffirm the importance of an ironclad Korea-U.S. alliance as a linchpin of peace and prosperity on the Korean Peninsula and in Northeast Asia and the need for the stable presence of U.S. forces in Korea.”

Since 1991, Seoul and Washington have conducted regular SMA negotiations under the Status of Forces Agreement (SOFA) to decide on Korea’s financial contribution to the stationing of U.S. troops in the country, usually striking multi-year deals.

Under the previous one-year 10th SMA signed in February 2019, which expired at the end of that year, Seoul agreed to pay 1.0389 trillion won, or 8.2 percent more than what it spent the previous year, amounting to nearly half of the cost of the upkeep of U.S. troops here.

Korea’s cost-sharing contribution has increased some 40 percent over the past decade, with Seoul paying 790.4 billion won in 2010. A 13.9 percent increase in 2021 is the first double-digit hike.

“It is important to ensure more stability for the U.S. Forces Korea, and to this end, it is important for us to contribute responsibly to the alliance in accordance with our national power,” a senior Foreign Ministry official told reporters Wednesday.

The ministry also noted that defense spending, vetted by the National Assembly, reflects the country’s financial and defense capabilities and is “a reasonable standard that citizens can verify and trust."

Ned Price, the U.S. State Department spokesman, said in a press briefing Monday that the two countries reached “a consensus on a proposed text of a new six-year Special Measures Agreement, or SMA, that will strengthen our alliance and our shared defense.”

When asked if the new U.S. administration made less harsh demands than the Trump team, Price replied, “We have engaged in good faith, constructive negotiations,” noting that the agreement is one “that benefits both sides.”

He added that Seoul and Washington are “now pushing final steps needed to conclude the agreement for signature and for entry into force.”

U.S. Secretary of State Antony Blinken and Defense Secretary Lloyd Austin are expected to visit Seoul on their first Asia trip next week after a three-day trip to Japan, which could serve as an occasion to sign the new accord. The deal will have to be ratified by National Assembly before it takes effect.