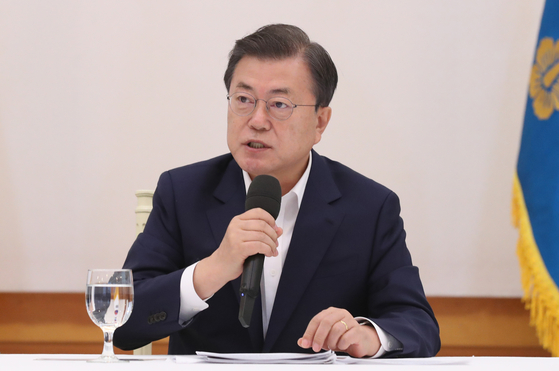 President Moon Jae-in on Wednesday speaks during a luncheon meeting with ruling Democratic Party leaders at the Blue House. [YONHAP]


President Moon Jae-in encouraged the ruling party on Wednesday to pass a conflict of interest law in response to the snowballing scandal over public servants using inside information to snap up valuable property.

"The people are infuriated over the land speculation scandal involving workers at LH [Korea Land and Housing Corp]," Moon said in a meeting with leaders of the ruling Democratic Party (DP) at the Blue House on Wednesday. "Workers for the state-run land developer and public servants in charge of development projects made speculative property purchases by using inside information, and their unacceptable act destroyed our society's fairness and trust."

It is the first time that Moon publicly addressed the scandal, triggered by revelations by liberal civic groups one month before mayoral by-elections in Seoul and Busan.

The People's Solidarity for Participatory Democracy (PSPD) and the Lawyers for a Democratic Society dropped a bombshell on March 2 by saying that LH employees bought land in the cities of Gwangmyeong and Siheung in Gyeonggi before the government announced large urban development projects.

Moon subsequently ordered his government to look into the case, and the police raided LH headquarters and other regional offices on Tuesday. But the state prosecution agency has been largely left out of the investigation, casting doubts on the thoroughness of any investigation.

Moon told his party leaders Wednesday that the lawmakers must introduce structural changes to improve transparency in officialdom, citing an old saying, "Don't tie your shoes in the cucumber field." (Doing so invites suspicion of stealing. A conflict of interest law would remove such suspicions, he suggested.)

"The government and the investigation will, of course, lay bare the truth and hold the responsible people accountable, but the National Assembly should also pay special attention to create a system that will drastically improve transparency of real estate dealings," Moon said. "Furthermore, I hope lawmakers will build a consensus to create a conflict of interest prevention system."

Moon said the anti-graft act introduced in 2016, known as the Kim Young-ran law, paved the way for the country to clean up de facto bribes. The latest scandal should serve as an opportunity to create a strong conflict of interest prevention system, he said.

A bill to prevent conflict of interest among public officials was submitted to the National Assembly in 2013, but it was never passed. Critics said the lawmakers were reluctant to establish a law regulating themselves.

Moon's request to the DP to pass such a law indicates that the administration is taking the LH scandal seriously. It undermined the president's continuing attempts to cool off the property market ahead of April 7 by-elections.

The mood at the luncheon was tense compared to a meeting between Moon and DP leaders that took place Feb. 19. At the time, Moon praised the successful cooperation between the administration and the ruling party.

Rep. Kim, the DP floor leader who is also acting chair of the party, responded that the party will follow through on Moon's order. "We must completely end corruption and moral hazard in officialdom," Kim said. "We will consult with the administration to draft and pass bills to fundamentally prevent corruption and speculation by public officials."

Meanwhile, the DP and the Blue House denied that Moon will sack Land Minister Byeon Chang-heum over the scandal.

"We've never discussed it," said Kim after a DP Supreme Council meeting earlier in the morning. "If it is necessary for a top government official to take responsibility, he or she will do so, but the government investigation hasn't even been concluded."

The Prime Minister's Office is scheduled to announce the results of the government's preliminary investigation on Thursday.

Sources said Moon and DP leaders did not discuss the fate of Byeon during their luncheon meeting. "His name was never mentioned," said a lawmaker who attended the meeting. "Moon actually pushed for speedy implementation of a real estate market stabilization measure announced last month. That means the minister is staying."

Replacing the minister just two months after his appointment would actually hurt Moon politically, another DP lawmaker said. "The LH scandal is not something that will go away by sacking the minister," he said. "If Moon fires him, the opposition will actually attack the administration further."

It remains to be seen if Prime Minister Chung Sye-kyun will recommend Moon fire Byeon.

"After we check on the situation, everyone who holds responsibility will be held accountable," Chung said in a KBS radio interview on Wednesday.