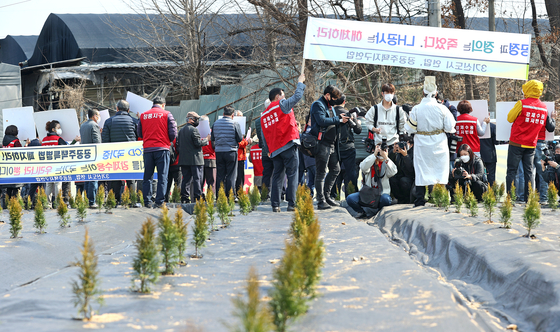 Protesters on Wednesday demand the scrapping of a Gwangmyeong-Siheung development plan in front of a property allegedly bought by an LH employee based on inside information. [YONHAP]


The Gwangmyeong and Siheung city governments announced Wednesday they have identified 13 city employees who bought land on the site of the Korea Land and Housing Corp's (LH) Gwangmyeong-Siheunng New Town development, possibly with inside information.

Adding to an earlier identification of one Gwangmyeong city employee, this brings the total number of local government employees linked to the LH inside-information scandal to 14.

Wednesday’s announcements by two city governments are interim results of internal probes after civic groups on March 2 accused LH employees of using inside information to purchase land in the areas slated for public housing redevelopment.

Gwangmyeong launched an internal probe into its own employees on March 4. It is making inquiries into not only the LH plan, but also other developments.

At a press conference on Wednesday, Gwangmyeong Mayor Park Seung-won said, “Of the additional five employees who have been confirmed to have made land transactions, there have been no illegal activities. However, we are still inquiring if they used inside information.”

The five civil servants identified by Gwangmyeong this week purchased vacant lots or agricultural land ranging from 100 square meters (1076 square feet) to 1,890 square meters (0.5 acres) between 2015 and 2020, while the employee identified earlier bought a forested area estimated at 793 square meters.

Meanwhile, Prime Minister Chung Sye-kyun convened an emergency meeting at the central government complex in Seoul on Wednesday to discuss some cooperation between police and the state prosecution service in the case, saying that communication between the two state agencies was “of the utmost importance.”

At the meeting, police and the state prosecution service agreed to coordinate actions related to questioning, investigation and indictment before bringing potential cases to trial. They also agreed to assign a prosecutor specializing in real estate matters to the government’s joint inquiry team, which is looking into purchases made by civil servants and public corporation employees.

The state prosecution service is to provide legal counsel in the questioning and inquiry process being conducted by the joint inquiry team.

The ministers at the meeting also affirmed their commitment to the government’s policy of leaving the main responsibility for the probe into LH with the joint special investigative task force set up by the Prime Minister’s Office and centered around the National Investigative Headquarters, a division within the Police Agency.