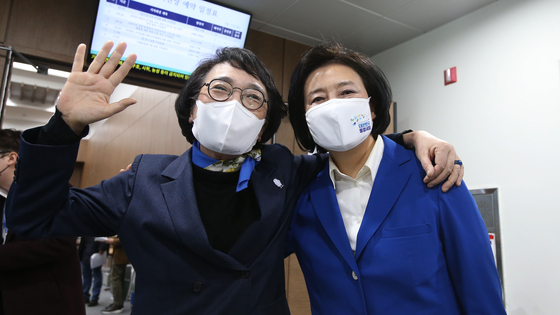 Kim Jin-ai of the Open Minjoo Party and Park Young-sun of the Democratic Party pose for a photo before a press conference to announce their agreement to back a single candidate for the April Seoul mayoral by-election. [YONHAP]


The ruling party and its liberal ally Wednesday agreed to back a single candidate in the Seoul mayoral by-election.

According to chief negotiators of the Democratic Party (DP) and Open Minjoo Party (OMP), the two sides agreed to hold a primary and consolidate their candidates by March 17. A round of voting by Seoul voters and another round of voting by members of the two parties will decide the final candidate.

The DP's mayoral candidate, Park Young-sun, said in a press conference that she has high expectations for the merger. "I hope this process will be a gift to both of us," she said.

Kim Jin-ai, the OMP's candidate, said she is looking forward to a great debate with Park as a part of the consolidation process.

According to the two parties, the two rounds of votes will take place March 16 and 17. The two rounds will hold equal weight in deciding the victor.

Park and Kim will have a TV debate on Friday and a radio debate on Monday.

After the merger, the winner will register her candidacy with the National Election Commission on March 18.

Speculation also grew that the two parties could eventually merge. While the DP is reluctant to discuss that possibility, the OMP is less reticent.

"A party-to-party merger is something that should be separately and calmly discussed after the by-election," said Rep. Kim Jong-min of the DP, the chief negotiator for Park. "It is inappropriate to link a party merger with the candidate consolidation."

Rep. Kang Min-jung of the OMP, however, was more openly encouraging of the idea. "Supporters and members of the OMP and DP believe that the candidate consolidation is a part of a process of greater unity," she said.

Meanwhile, former presidential spokesman Kim Eui-kyeom, who resigned in March 2019 after reports that he invested in real estate possibly with inside information, will become a lawmaker for the OMP, filling the proportional representative seat of Kim Jin-ai.

Kim Jin-ai resigned on March 2 to run in the Seoul mayoral race. Since she is a proportional representative, her seat will be filled by the candidate who won the next greatest number of votes in last April's general elections, who was Kim Eui-kyeom.

The OMP only fielded proportional representative candidates last April and won three seats, which were filled by Kim Jin-ai, Choe Kang-wook, also a former presidential aide of the Moon Blue House, and Kang.

Since Moon took office, the administration has waged war on high real estate prices, taking aim at real estate speculators. Prices have actually risen, and many administration figures have been accused of profiteering in property. While serving as Moon's spokesman, Kim purchased a building inside a redevelopment zone for 2.57 billion ($2.2 million) won in July 2018. He sold the property for 3.45 billion won in December last year, making a 880 million won profit.

Although Kim donated 370 million won to the Korea Student Aid Foundation, which he said was his profit minus expenses, his reputation took a hit.

Kim originally wanted to run for National Assembly for the DP from his hometown of Gunsan, North Jeolla, but gave up the bid two months before last April's elections. He joined the OMP and landed a proportional representative nomination.