Can the last Wyverns lead the Landers back to glory?

Can the last Wyverns lead the Landers back to glory? 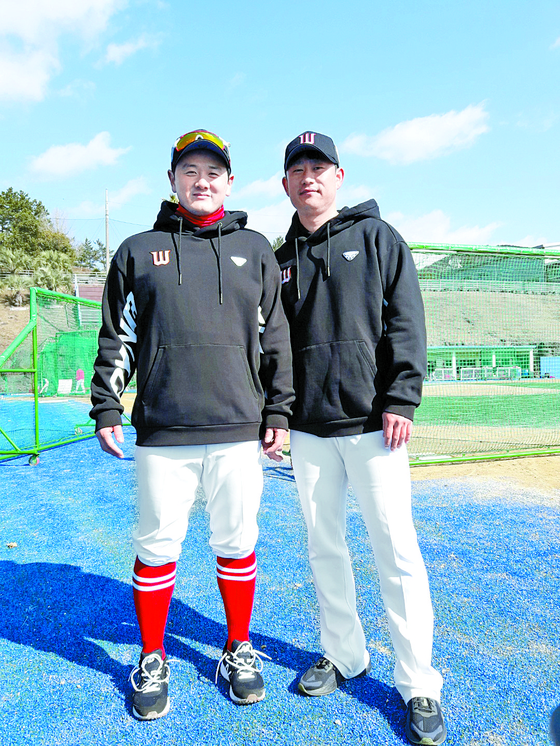 
Second baseman Choi Joo-hwan and pitcher Kim Sang-su will go down in history as the very last players to sign with the SK Wyverns, the former Incheon club that has now been reborn as the SSG Landers.

Now the two have to lead the Landers back to the top of the table.

After winning the Korean Series in 2018, the Wyverns took a dramatic tumble, finishing last season in ninth place. The team spent the off season trying to strengthen their offense.

SK signed free agent Choi, formerly of the Doosan Bears, on a four-year deal worth a maximum 4.2 billion won ($3,700,000), the first time in nine years the club has signed an external free agent. SK then brought in Kim Sang-su from the Kiwoom Heroes on a sign-and-trade deal to avoid hefty free agent fees.


Although the two have never played together, they entered the KBO at the same time — back in 2006.

Choi is a force to be reckoned with at second base, topping the league in the position with a batting average of 0.306 with 16 home runs and 88 RBIs in the 2020 season.

In 2018, Choi hit 26 home runs, his personal best, despite playing out of Jamsil Stadium, which tends to favor pitchers over sluggers. Now playing at SSG's smaller Incheon Stadium, Choi's home run count is expected to increase.

Kim, who made his debut with the Samsung Lions in the second round in 2006, grew into a solid bullpen pitcher after moving to the Nexen Heroes in 2010.

"I knew [Sang-soo was joining] only after seeing the news,” said Choi. “I met him right away the next day at the club and congratulated him.”

For Kim, having some teammates the same age is a nice change.

"When I was at Kiwoom, I barely had any teammates who entered in the same year as me, so I confided my feelings to my seniors when I was having a hard time,” said Kim. "It's good to have a lot of friends of the same age now, including Joo-hwan, [Lee] Jae-won, [Kim] Sung-hyun, and [Kim] Se-hyun."

Although they're now wearing the same uniform, the two have met eight times on the field before. The jury is still out on who has an edge — their head-to-head record ends with two hits and two strikeouts.

Choi said, "I don't really focus on my opponent records. When I met [Kim] when he was in Kiwoom, I was focused but I don't think I had good results."

Kim also recalled, "Doosan had a lot of good hitters, and [Choi] was one of the top hitters so it was tricky.”

Although Choi and Kim were the last players to sign with SK, they never got to play in Wyverns uniforms. Still, expectations are high as new owner Shinsegae Group has promised the club its full support, and Choi and Kim are keen to look out for each other on the field.

"I’ll have to catch well when other pitchers are on the mound, but I will do my best to defend especially when Sang-soo is out,” said Choi.

"When Sang-soo takes the mound, it means that it's a close game so I'll hit a home run so he can become the winning pitcher. If we do it two or three times, won’t the team win two or three more games?”

"I’m happy to play with a good batter like Joo-hwan,” said Kim. "I hope he doesn’t get injured and will stay in the first entry until the end.

"We will improve our team's performance so they say, ‘We made a good investment. We did a good job bringing in these players.’”