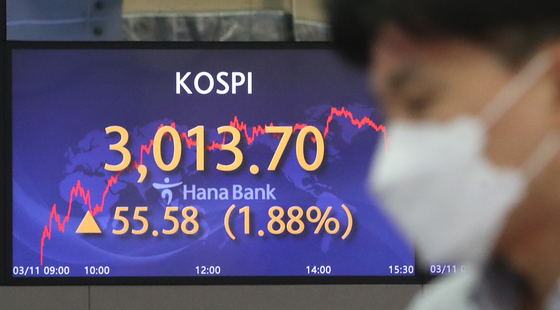 A screen at Hana Bank's trading room in central Seoul shows the Kospi closing at 3,013.7 points on Thursday, up 55.58 points, or 1.88 percent from the previous trading day. [NEWS1]

Stocks bounced back nearly 2 percent to recover above the 3,000-point level Thursday as foreign buying increased amid eased inflation concerns. The won rose against the dollar.

The Kospi rebounded after losing ground for the fifth session in a row as foreign buying increased amid a slowing hike in bond yields and the U.S. currency's value.

In Seoul, chemical, bio and tech stocks made steep gains after a weeklong retreat.

The local currency closed at 1,135.9 won against the dollar, down 6.8 won from the previous session's close.