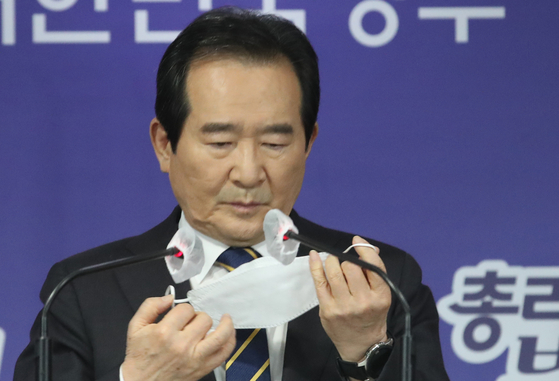 
Prime Minister Chung Sye-kyun announced Thursday that a government inquiry identified 20 employees from the Korea Land and Housing Corp. (LH) and Land Ministry as possibly using inside information to purchase land on the site of LH's Gwangmyeong-Siheung New Town development.

The inquiry’s preliminary results add seven people to an initial 13 LH employees accused on March 2 by two civic groups –– the People's Solidarity for Participatory Democracy (PSPD) and Lawyers for a Democratic Society (Minbyun) –– of using inside information and third-party intermediaries to purchase land in the areas slated for development.

In addition to the Gwangmyeong-Siheung area at the center of the controversy, land purchases suspected of being made using inside information were found in New Town development sites in Goyang, Namyangju, Gwacheon and Gyosan, Gyeonggi.

A government inquiry team is conducting an inquiry into the real estate affairs of public employees. The main probe into the LH scandal is being conducted by a special task force led by the National Investigation Headquarters, a division of the National Police Agency.

Relatives or other third-party intermediaries with ties to LH or Land Ministry employees will be investigated by the special task force instead of the inquiry team.

Legislative reforms in 2020 which shifted many of the state prosecution service’s investigative powers to the police agency have emerged as a major point of contention in the inquiry and investigative process in the LH scandal.

Although a prosecutor specializing in real estate crimes has been assigned to assist the inquiry team, the state prosecution service has largely been sidelined in the main investigation by the special task force, which is under the direction of the Prime Minister’s Office.

“Why is the so-called ‘candlelight government’ afraid of the popular will?” asked Kim, in reference to the candlelight vigils that led to the impeachment of former president Park Geun-hye and propelled Moon to power. “Why does it fear popular opinion so much that it has to prevent an investigation by prosecutors and the National Audit Service?”

Members of the ruling Democratic Party (DP) also weighed in Thursday on the state prosecution service’s absence from the investigation, raising questions about prosecutors’ silence.

Speaking in a phone interview on TBS Radio, Justice Minister Park Beom-kye said, “The land purchases which allegedly took place using inside information took place two to three years before the New Town development was first mentioned in 2018. Since the state prosecution service had investigative authority then, why didn’t they speak up?”

Sensing the possibility of political fallout from the scandal, prominent figures within the ruling DP have commenced damage control.

In his announcement Thursday, Prime Minister Chung vowed the government would “gouge out the sickness from within LH and replace its bones” and “restore people’s confidence” in the government by establishing new policies to “eradicate the greed of public employees.”

“As [Land] Minister or former CEO of LH, [Byeon] bears responsibility as a leader,” Kim said in a television interview with MBC. Byeon was CEO of LH from April 2019 to December 2020, when he was nominated as Land Minister.

Of the 20 cases of suspicious land purchases announced in the preliminary inquiry results, 11 occurred while Byeon was CEO of LH.

The allegations against LH and Land Ministry employees have also set off a flurry of probes in other government bodies.

In a separate announcement Thursday, the Blue House said it had done its own internal inquiry of real estate purchases by its people. None of its current 368 civil servants at or above secretarial rank had been found to have engaged in suspicious real estate purchases, it said.

A Blue House source said that the inquiry would soon be extended to 3,714 civil servants below secretarial rank.

The city governments of Gwangju, Daejeon, Daegu and Busan on Thursday also announced the formation or expansion of investigative teams to probe the real estate affairs of their civil servants.