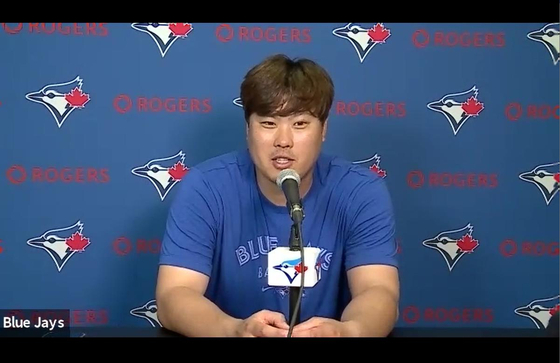 
After throwing 50 pitches in an intrasquad game on Wednesday, Toronto Blue Jays ace Ryu Hyun-jin discussed his friendship with SSG Landers slugger Choo Shin-soo and how he thinks the former major league star will fare in the KBO.

In a Zoom session with local reporters following an intrasquad game in Dunedin, Florida, on Wednesday, Ryu said he already misses Choo, who recently moved to Korea to join the KBO for the first time in his career.

"Since [Choo] has been playing baseball in the United States alone for 20 years, I think it would be difficult for him to adjust to Korea," Ryu said.

"Obviously, he will be the most senior player on the team, but there must be some things that he'll have to get used to quickly. It would have been nice if we played together in the United States for a few more years."

Choo was the most established Korean playing in the major leagues, spending over 16 seasons in the United States. He has played for the Seattle Mariners, the Cleveland Indians, the Cincinnati Reds and the Texas Rangers.

Choo signed with SSG for 2.7 billion won ($2.4 million) on Feb. 23. Receiving the number 17, he officially joined SSG to train on Thursday.

With Choo gone, Ryu is now the most experience Korean player left in the majors. Ryu is currently in Blue Jays spring training in Florida, where he pitched 50 balls in an intrasquad game on Wednesday.

"After spring traninig was suspended last year due to Covid-19, I had difficulty building my strength, so my ball control wasn't perfect," said Ryu. "The preparatory period was also different, so there seemed to have been difficulties in many ways. But this year, everything is going as planned."

Ryu is expected to take the mound against the New York Yankees to begin the season on April 1.