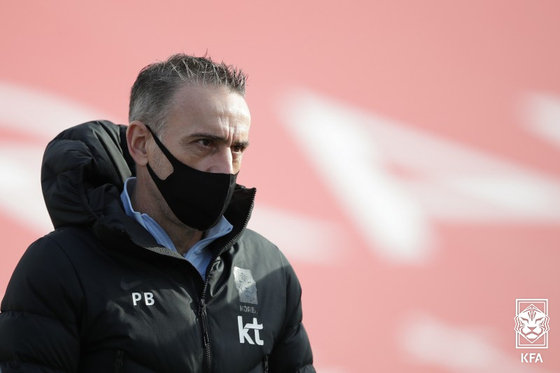 Korean national football team head coach Paulo Bento is seen on the sidelines of the pitch at BSFZ Arena in Austria, where Korea faced Qatar on Nov. 17, 2020. [KFA]


The Taeguk Warriors will be back in action on March 25, taking on Japan in their first friendly of the year.

The Korea senior squad will face Japan at Nissan Stadium in Yokohama, Japan on March 25, with the kickoff time still to be determined.

The Taeguk Warriors were last in action in November 2020, when the team flew to Austria to play its first fixtures of the year against Mexico and Qatar. The ill-fated trip saw six members of the squad test positive for Covid-19 including key players like Hwang In-beom of Rubin Kazan and goalkeeper Jo Hyeon-woo of Ulsan Hyundai FC. The team went on to lose to Mexico and beat Qatar.

Although the two have a well-founded football rivalry, Korea has long had the edge on the pitch. The two teams have met 79 times, with Korea winning 42 while Japan have taken just 14. Japan last beat Korea in an official match in 2013, with a 2-1 win at the EAFF East Asian Cup.

Upon returning to Korea after the game, players will have to isolate for one week under a special deal with the government to skip the normal two-week quarantine period. This poses problems for the Korea Football Association (KFA), however, as under FIFA rules teams can refuse to release players that will be required to quarantine for at least five days.

Those quarantine rules mean that both K League and international clubs could choose to reject the KFA's request to release players during the international break.