Distancing regulations to be extended another two weeks

Distancing regulations to be extended another two weeks 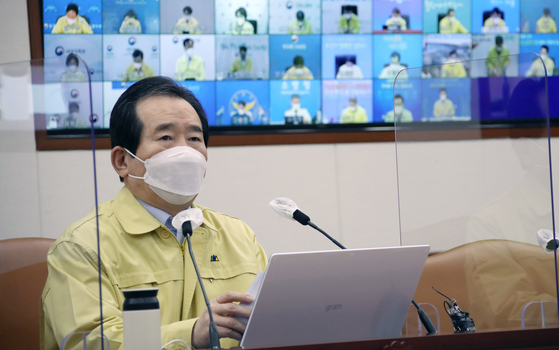 Prime Minister Chung Sye-kyun announces an extension of current social distancing recommendations for two more weeks at a meeting at the Central Government Complex in Seoul on Friday. [YONHAP]


The ban on gatherings of five people or more will be extended for two more weeks, Prime Minister Chung Sye-kyun said Friday.

“The government has decided to keep the current social distancing guidelines for another two weeks, including the ban on gatherings of five people or more,” Chung said during a meeting at the Central Government Complex in Seoul on Friday. “The number of daily infections has been in the 300s and 400s for the past eight weeks. Now is not the time to relax the measures.”

The ban on private gatherings of five people or more has been in place since late December when Korea had a third wave of infections, with daily cases peaking at over 1,200 on Christmas Eve. The number of daily cases has dropped to be in the 300s and 400s since early February.

The greater Seoul area is under Level 2 social distancing recommendations, while the rest of the country is at Level 1.5. The latest extension keeps the recommendations in place until March 28.

Under Level 2, cafes, restaurants, bars, including those that involve dancing, and noraebang (singing rooms) are allowed to operate from 5 a.m. to 10 p.m. every day. Hagwon (private cram schools) and theaters are allowed to operate through all hours, but theaters need to leave every other seat empty. Sports games can be watched in person, but only up to 10 percent of its seats may be filled. Weddings and funerals can be hosted with less than 100 people and churches can hold services with up to 20 percent of seats filled.

Under Level 1.5, cafes, restaurants and noraebang can remain open beyond 10 p.m. Bars, including those that involve dancing, are still asked to shut down at 10 p.m. Weddings and funerals can host up to 500 people. Churches and sports stadiums and arenas can fill up to 30 percent of its full seating capacity.

Korea added 488 cases of Covid-19 infections Thursday, of which 21 were imported, according to the Korea Disease Control and Prevention Agency (KDCA).

Thursday's number was the highest it’s been in the past three weeks, according to the KDCA.

Among the local cases, 138 were based in Seoul, 157 in Gyeonggi, 56 in South Gyeongsang and 27 in North Chungcheong.

The cases in South Gyeongsang largely stem from a cluster of infections linked to a public sauna.

Korea has been vaccinating medical staff members at hospitals focusing on Covid-19 treatment, as well as staff members and patients younger than 65 at nursing homes for the elderly and long-term care hospitals since Feb. 26.

As of Thursday, a total of 546,277 people in the target vaccination group have received their first shot, of which 526,414 received the AstraZeneca vaccine and the rest the Pfizer vaccine, according to the KDCA.

Of the vaccinated, 7,567 showed minor reactions such as muscle pains, headaches and chills, while five showed major but not fatal reactions like convulsions, and another 15 died following vaccination. The KDCA is investigating the causes of deaths. Last week it determined that the first eight deaths were not related to the vaccinations.