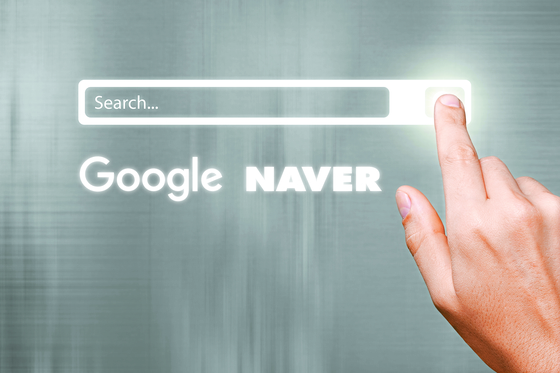 Google is now so popular it has become a verb in its own right, as in “google it.”

Some countries have refused to be assimilated, the shortlist including North Korea, China and Russia. South Korea has also been on that list for years, and it is there largely because of Naver and its iconic green search bar.

In Korea, most people have been choosing to “naver it.”

That’s fast changing, as the U.S. search engine is close to taking the lead. Its results are seen by some as being more accurate, while it does not burden the user with too many advertisements.

The famous Google minimalist approach seems to be paying off. 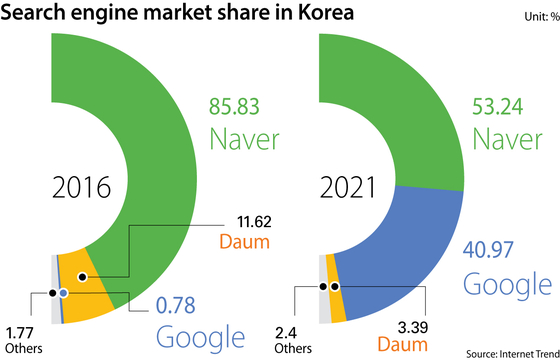 Google’s presence was negligible at 0.78 percent only five years ago, according to data tracker Internet Trend, but the share shot up to 41 percent this year, the average of the index between Jan.1 and March 10.

At the same time, the share of the homegrown portal shrank from 86 percent in 2016 to 53 percent this year. The change in the share indicates that the gain of Google has primarily come at the expense of Naver.

Both Naver and Google declined to confirm the numbers.

Industry insiders say that people in quest of unpaid query results turned towards Google especially for their research or work-related tasks.

“It was by around 2010 that people started looking up some kinds of knowledge and specialized issues and going beyond just browsing news,” said Brandon Lee, CEO of BALC, a Korean digital marketing company.

“But they have become increasingly aware they can’t get what they want on Naver because it pushes them towards results produced by its own services, like Naver Blog, Café and others. But no one would give credit for information created by an unknown blogger,” Lee said.

As Lee pointed out, Naver’s search results are heavily-oriented towards its own platforms and services to lock users into its suite of products.

If you type in “gap between the rich and poor in Korea” on Naver, the very top result comes from a Naver blogger commenting on the government’s policy aimed at reducing the wealth gap in the rural area, followed by other blog postings.

The same query on Google yields a news article on the growing disparity between the rich and poor at the top along with the research papers on the subject.

Naver tends to downgrade content provided by competing portals or foreign websites, according to some industry insiders, while it bans web crawlers from indexing its blogs and online community pages.

Naver denied the suspicion, adding that it generates search results "in a non-discriminatory manner."

Those policies prompted people seeking more diverse results to use Google together with Naver.

“When I look up images for designing books, Google is the go-to place for me,” said Kim Jin-young, a 34-year-old book designer, “Because they have a wider range of images from all around the world and more old image data.”

Heavy advertising and sponsored postings on the local site also weakened its standing.

“If you search a certain type of product on Naver, you will be bombarded with 10 ‘power links’ at the top and rounds of paid postings that promote the products, while Google only shows 3 to 4 ads,” Lee said.

Naver stands as the third most used app in terms of the number of users, according to data released by WiseApp last year, trailing behind YouTube and Kakao Talk.

Based on the time spent, YouTube is unrivaled with a total of 62.2 billion minutes watched by Korean users last November.

And the portal operator generates record profits with features that many users find unsatisfying on Google.

Naver has made it clear that its priority is customization designed to deliver search results in synch with user interests.

Naver “is further fine-tuning based on the user’s gender, location and age so that we provide the information that the user wants to consume,” Naver said in a statement last month.

It will likely gravitate more towards being an entertainment portal rather than a search engine for professionals.

“Naver sees the search engine function as a medium leading into its own different services, while for Google, accurately addressing the queries stand as the primary goal,” the CEO said.