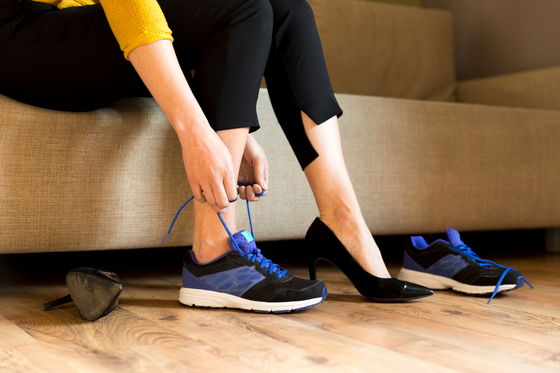 
Within the campus of Ewha Womans University, situated snugly on the first floor of the Helen Hall building is a shoe repair shop, run by its owner Huh Wan-hwae.

Often referred to as the “Man of Ewha’ amongst the alumni, he’s been running his little shop for over 30 years. He arrived in Seoul from Namwon, North Jeolla, in 1970 and learned his craft from one of the shoe repair shops near the campus, before opening his own shop called “Ewhasa.” He was so skilled in his work that the student council from the university asked him to relocate his shop to within the campus so that it would be easily accessible for students. It's been open for business in Ewha since 1990.

Just a decade ago, Huh would receive more or less 200 customers per day but now, the number has dwindled down to two to three a day. Sometimes, no one visits. 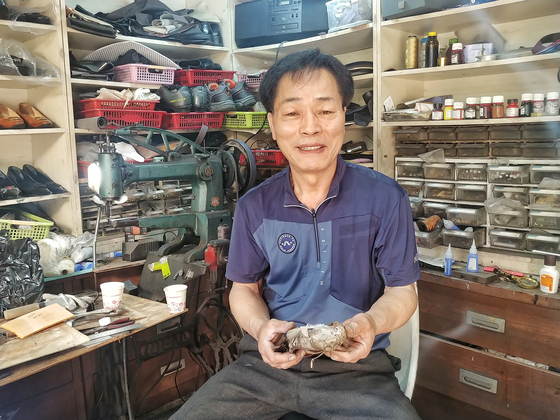 Huh Wan-hwae, the owner of a shoe repair shop located on the campus of Ewha Womans University, is thinking about closing due to lack of business as more and more students choose sneakers over pumps or heels. [JOONGANG ILBO]


“It’s not because of Covid-19,” Huh said. “People just don’t wear pumps or loafers anymore. In the past Ewha students sported some of the dressiest campus looks with their clucking heels, but now I even see students trudging to school in slippers. I still find it difficult to adjust to the fact that college students wear sneakers like they did in middle and high school.”

Alumni haven’t forgotten the shop and Huh’s skills, and try to make up for the lack of student customers. In the corner of the shop hang collection receipts  for shoes, even some from overseas sent by his longtime customers.

“I want to continue to work when I think of the alumni who think of me, but I cannot keep working at this rate of deficit, so I’m deliberating about closing the shop,” Huh said.

Huh is not alone. According to a report from Seoul Metropolitan City on March 4, the shoe repair shops often seen on the streets of Seoul decreased to 940 from prior 1,117 in 2016. In Jung district, central Seoul, where there is a high concentration of offices and many white-collar workers, the number reduced from 133 to 111, and in Gangnam district, southern Seoul, 105 to 92 shops.

According to another shoe repairman who’s been polishing up the shoes of conglomerate executives for more than 15 years, “even before Covid-19 hit, my work load shrunk to more than 30 percent compared to 10 years before, and now the business is even worse after the pandemic as more people telecommute.” 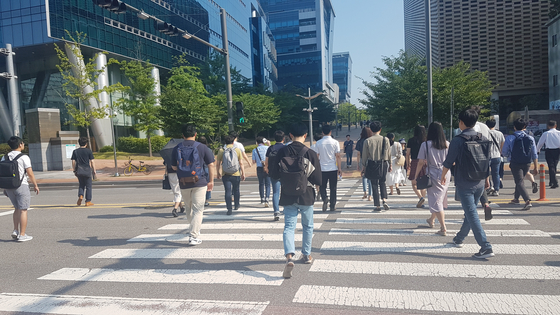 A scene from the morning commute in Pangyo, Gyeonggi, where many local IT companies are located. Many of the workers wear casual clothes and shoes to work instead of suits and ties. [JOONGANG PHOTO]


Another factor affecting business is the lax view many companies are now taking on formal attire for the office. Previously known as the strictest conglomerates in relation to formal dress codes, Samsung Electronics, Hyundai Motor and SK Hynix now allow male workers to wear shorts to work. “Even executives wear semi-causal clothes — no tie and jacket — to work nowadays unless they’re participating in an important event or meeting,” one of the department heads of Samsung Electronics who wished to remain anonymous said. “As people wear what’s more comfortable for them, shoes are also following suit. I see a lot of employees wearing dark-colored sneakers or loafers [instead of formal shoes].”

A shoe repair shop which used to be inside the SK Group headquarters in central Seoul has recently vacated its spot. As more workers wear comfortable clothes and shoes instead of suits, the act of leaving and picking up shoes that need repairing seems to be a thing of the past.

In fact, in IT service industries such as Naver or Kakao, wearing formal clothes to work is a rarity. “Almost all 1,000 workers wear sneakers,” according to a worker in the industry who wished to be identified only by his surname Kim. “If we spot someone wearing formal clothes and shoes, we ask them if they are visiting a governmental organization or going somewhere fancy.” 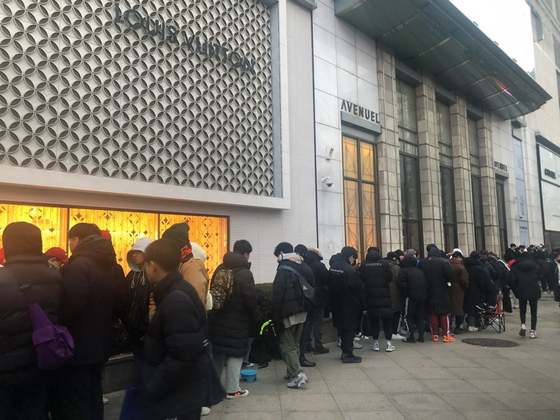 People lined up outside a department store waiting for a sale to begin. [LOTTE SHOPPING]


Changing fashion trends are also evident on university campuses. High heels were once considered a must have addition to any freshman's outfit, but now the often uncomfortable footwear is a thing of the past.

“Short skirts and dresses were once considered to be fashionable but uncomfortable, but now students prioritize their comfort first,” Kim Ji-yeon, a student from Sungshin Women’s University said. “What’s popular now are long skirts and wide-leg pants — clothes that wearers can move around freely in — and shoes also follow the trend.”

Another student with the surname Hwang added, “it’s already hard enough as it is and I don’t want my feet to suffer too.”

Global luxury brands such as Gucci, Louis Vuitton and Balenciaga, have all taken note and are pushing sneakers as their iconic items.

The sneakers trend is particularly popular among millennials and Gen Z. Collaborations between celebrities and sports stars with designers can lead to limited edition sneakers being resold for double or triple the original retail price. 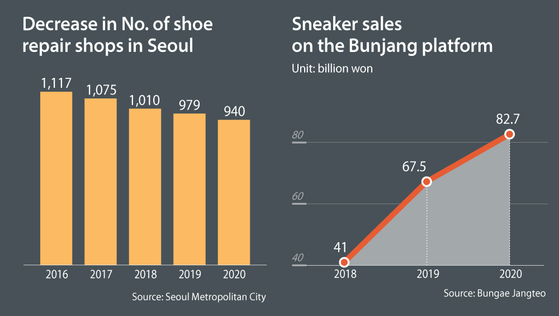 On Bungae Jangteo, a platform for secondhand goods, the sales of sneakers jumped to 82.7 billion ($73 million) won last year, from some 41 billion won in 2018.

“Instead of contemplating about donning proper attire taking into account the time and place, the shifting notion is veering toward wearing what’s comfortable and practical without necessarily taking into consideration what others will think,” evaluated professor Choi Yoon-jung from Mokpo University’s fashion design and textile studies. “If in the past it was considered radical to carry backpacks with suits or matching sneakers with suits, it’s now the conventional office look. I believe this trend of practical wearables is here to stay.”