It’s not only K-pop megastars like Blackpink or BTS that get to release documentary films showcasing their gigs and detailing more about their music and philosophy behind it.

Popular indie band Se So Neon and relatively new trio Gift became the first indie musicians to get to shoot a film version of their concerts and also release it on the big screen.

During the preview of their films on March 11 at CGV Yongsan in central Seoul, the members of both bands squirmed in their seats, finding it difficult to watch their own faces for the first time on the silver screen.

CJ Group’s Cultural Foundation has been organizing various programs to support indie musicians since 2010. In 2018, the foundation launched a live video project called “Azit Live,” which produces professional video content of indie musicians’ performances and also promotes them through the foundation’s YouTube channel.

“It was really embarrassing to see my face close-up on such a large screen,” said Se So Neon’s vocalist and guitarist So-yoon during the press conference held right after the media preview. “It’s really an honor for an indie band like us to have such an opportunity, especially amid the coronavirus pandemic when our scheduled gigs both in and outside Korea have been canceled.”

Se So Neon, a trio made up of vocalist and guitarist So-yoon, bassist Park Hyun-jin and drummer Usu, was scheduled to tour 20 cities in 10 countries last year, but all events got canceled as the borders closed amid the pandemic.

“'Azit Live Premium’ is theater-style content that has expanded from the foundation’s existing online video content ‘Azit Live,’” said Kim Mo-ran from CJ Cultural Foundation. “Fans will be able to enjoy premium sounds from their favorite band’s music while watching them perform up close on a movie theater widescreen while sitting in a comfortable seat.”

According to the foundation, the film is far from being mere recordings of the bands’ live performances, but instead is a carefully and professionally recorded and edited video using a set that can best portray the bands’ color and music style.

“There are a lot of talented indie musicians that break the boundaries of music genres by producing their own kind of music. In order to broaden the options for many listeners who seek their music, we decided to take the concert to local theaters and tried to make their music be heard at its best while featuring the musicians in the most appealing way possible in their own way,” said Hong Young-pyo, a producer behind the two films.

“By using shooting equipment that are often used to film music videos or television commercials for idol stars, we tried to make sure the audiovisual quality is at its best. As for the editing, we tried to minimize cuts between each take for a more immersive effect. Inclusion of backstage scenes and interviews serve to show more about the band, off stage.”


The CJ Cultural Foundation said it picked Se So Neon and Gift to produce its first two "Azit Live Premium" films as they were both slated to release new albums around the time of the film’s release, and also have continued to be very active in the indie scene, alleviating their fans’ thirst to see their gigs amid the pandemic. The bands are also recipients of the foundation’s "Tune Up" project, which financially supports indie bands to either release a new album or to create a promotional video of their album.

“The Korean music industry is too focused on popular idol stars, allowing them to take most of the opportunities for producing various content through different platforms,” said Hong. “However, for musicians who have been more active as live performers in clubs and festivals, it’s been somewhat difficult to even run across such a chance.

“As we are more familiar with live stages where we can interact with the audience and exchange energy, creating video content for us had been quite dull, energy-consuming work,” said So-yoon from Se So Neon. “But when the coronavirus crisis affected us greater than we had anticipated, we realized the importance of diversifying the platform. Thanks to the CJ Cultural Foundation, we now have a high quality video that will last a lifetime.” 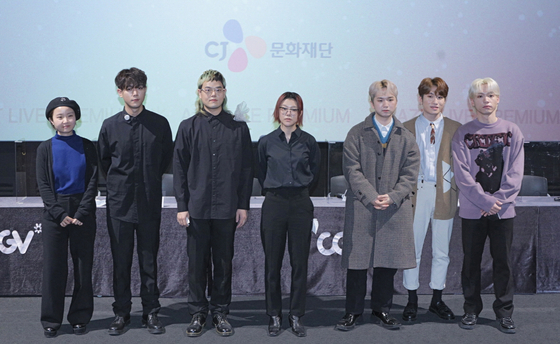 
Lee Ju-hyuk, the vocalist of Gift, also said the foundation’s offer to shoot "Azit Live Premium" came at a great time as the band was feeling uneasy.

“As an active live performer, witnessing live clubs and performance venues in Hongdae closing doors one after another as they were no longer able to survive amid the coronavirus pandemic, it felt like we were losing our hometown and there’s no place to go back to,” said Lee. “Then we were introduced with this opportunity, and by witnessing the result today — I am at a loss for words. I am so grateful.”

Se So Neon and Gift’s "Azit Live Premium" premiered on March 11 at five CGVs in five cities including Seoul, Busan, Gwangju, Daegu and Incheon. The screening ends on March 21.