Washington’s spring is far away

Washington’s spring is far away 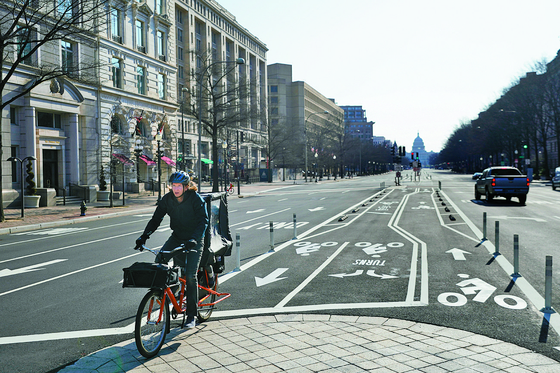 PARK HYUN-YOUNG
The author is a Washington correspondentof the JoongAng Ilbo.


“I am closing because I was told to, but I don’t know what’s going on or when I can open again,” said the manager at a neighborhood restaurant as I was walking out after my “last” meal on March 15, 2020. In the afternoon, U.S. President Donald Trump announced Covid-19 guidelines, ordering people to refrain from all non-emergency outings. Washington DC authorities banned indoor dining at all restaurants and bars from the next day. All retail stores, movie theaters and gyms except for supermarkets closed. Office workers started to work from home, and schools suspended in-person classes.

A year has passed, but not much changed in Washington. Recently, indoor dining was allowed, but nearly half of the restaurants didn’t open. A study showed that 60 percent of the restaurants that closed temporarily will not open again. Those that opened were empty. Most of the customers were civil servants and businessmen, who are still not communing to work, and there’s no in-person events like conferences. It is hard to run into people on the street during the day. Instead, the number of the homeless and panhandlers grew noticeably.

The United States went through numerous trials and errors, including on the issue of wearing face masks. Anthony Fauci, director of the U.S. National Institute of Allergy and Infectious Diseases, also was confused at first. In an interview with 60 Minutes on CBS on March 8 last year, Fauci said that there was no reason to wear masks, claiming that people may feel better and masks could block droplets, but they cannot provide perfect protection. People had sanitized everything they bought. Now, it is said that the chance of infection through surface contact was small. Even a country with advanced science was shaken when hit by a new disease.

However, the U.S. recovered its honor by coming up with vaccines first. The government offered enormous funds to six promising pharmaceutical companies and made advance purchase of the vaccines before they were developed. It offered a surprising term that companies didn’t need to pay back even if they fail to develop vaccines. It was possible because the United States had competitive pharmaceutical and bio industries.

Some 29 million people, or 8.6 percent of the U.S. population, have contracted Covid-19. Vaccine production and distribution hasn’t caught up with the spread of the virus. Asked when people can go back to the normal routine, President Joe Biden’s has changed his prediction. In February, he said, “by Christmas,” but in March, he said, “Around this time next year.” I should take good care of my body and mind until I get the vaccine.