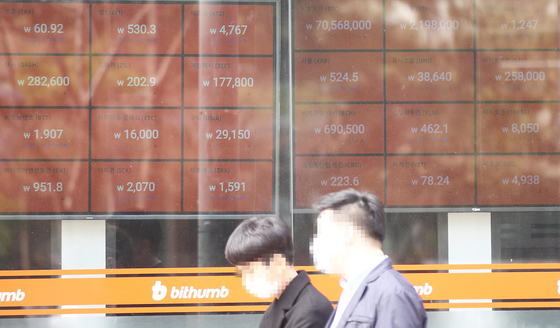 Electronic board in front of Bithumb's Gangnam office shows the value of bitcoin exceeding 70 million won for the first time on March 14. [YONHAP]


You can run. You can hide. You can stash your money in crypto.

The taxman will find you.

According to the National Tax Services (NTS) on Monday, it recovered 36.6 billion won ($32 million) of unpaid taxes from 2,416 tax evaders who invested in virtual assets including cryptocurrency.

This is the first time that the tax agency has tracked down unpaid taxes hidden in cryptocurrency.

In one case, a person who owns a hospital in Gangnam owed the government 2.7 billion won in income taxes. Despite living a luxurious life including staying in a high-end apartment, the hospital owner did not pay income taxes citing no income. It turned out that the hospital owner invested 3.9 billion won in cryptocurrency. The tax dodger paid the government after the tax agency confiscated the virtual currency account.

In another case, a person made 4.8 billion won after selling real estate in Gyeonggi. However, in an effort to dodge the 1.2 billion won capital gains tax made from the real estate sale, the person invested the entire amount in cryptocurrency.

Cryptocurrency has also been used to dodge paying inheritance and gift taxes as well.

The tax agency said it has been able to retrieve the unpaid taxes in virtual assets based on the ruling by the Supreme Court in May 2018. The court ruled that virtual assets are intangible assets, which have value as personal wealth.

According to the NTS, many have been trying to use virtual assets in hiding their wealth as they believe that it is hard for the authority to track down their cryptocurrency investments.

“Although it is slightly different accordingly to the exchange, one should consider that every cryptocurrency holding is owned 100 percent under a real identity, under a connected bank account as well as the owner’s date of birth,” said Chung Cheol-woo, head of the taxation bureau at the tax agency.

Cryptocurrency investments have increased in recent months as the value of crypto has been breaking records. Bitcoin, which for the first time broke 50 million won last month, surged above 60 million won less than a month later. And over the weekend, it rose to 70 million won.

The government expects with cryptocurrency value continuously rising, its retrieval of unpaid taxes will likely increase as well.

At the beginning of this year, the NTS stressed that it will utilize advanced technologies such as big data analysis in tracking down those that intentionally dodge taxes.