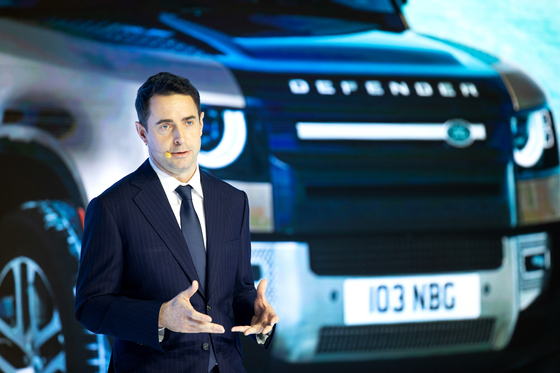 
British premium auto brand Jaguar Land Rover is hoping to rebound in Korea by strengthening its eco-friendly powertrain and after sales services, according to the local unit's managing director Robin Colgan who took office in October, 2020.

The importer and distributor will bring the petrol engine versions of its Defender 110 and Discovery SUVs to Korea within this year. Both models have only been available here with diesel engines.

"The global auto market has shifted toward a petrol-first strategy and Korea is no exception," said Colgan during a press conference Monday.

"Jaguar Land Rover has been somewhat late to adapt to that change. But we will gradually reduce dependency on diesel and have petrol options available across the range."

It will also bring a plug-in hybrid model to Korea within the first half of next year.

The automaker is releasing four models in Korea this year: The Defender 90 and partially revamped versions of the Land Rover Discovery SUV, Jaguar F-Pace SUV and XF sedan.

New models will be equipped with Jaguar Land Rover's new infotainment system, labeled Pivi Pro, which has been co-developed with LG Electronics.

The Pivi Pro, using Qualcomm's Snapdragon 820Am chip, is able to process multiple orders at one time without losing speed and can be remotely updated with its software-over-the-air technology.

Jaguar Land Rover Korea has teamed up with Korean telecom company SK Telecom to upgrade its navigation system specifically for domestic customers. The system will be installed on the company's upcoming lineup so that customers don't have to separately use smartphone navigation apps or connect to the vehicle's infotainment system.

Jaguar and Land Rover have shown disappointing performance in Korea over the past few years.

"The waiting time has been too long," he said. "We will make sure to have adequate workshop capacity so that we can see consumers in a timely manner."

Land Rover’s All New Defender is smart and rugged