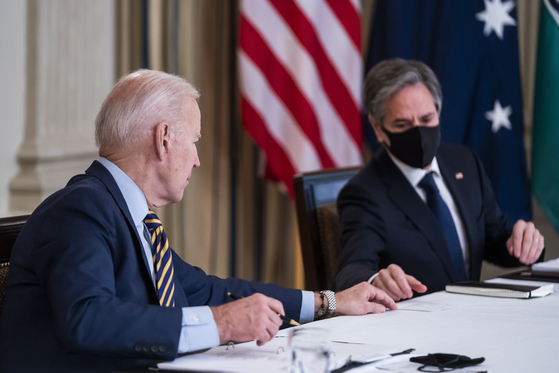 U.S. President Joe Biden, left, and Secretary of State Antony Blinken take part in a virtual summit with Quad leaders from India, Australia and Japan at the White House in Washington Friday. Blinken and U.S. Defense Secretary Lloyd Austin kick off their trips to Tokyo and Seoul this week. [EPA/YONHAP]


The Joe Biden administration is working to strengthen not only its trilateral cooperation with Korea and Japan, but also the bilateral relations between its Asian allies, the U.S. State Department stressed Sunday, ahead of the top American envoy's trips to Seoul and Tokyo.

“The Biden-Harris Administration is working to strengthen America’s relationships with our allies, and the relationships between those allies,” said the State Department in a statement Sunday. “No relationship is more important than that between Japan and the Republic of Korea (ROK).”

U.S. Secretary of State Antony Blinken and Defense Secretary Lloyd Austin kicked off Monday their visits to Japan and Korea, their first overseas trip since the launch of the Biden administration in January, signaling Washington’s commitment to the region.

The Biden administration has indicated it would take on a more active role in helping its two closest allies in the region overcome their differences as a part of its vision to push for stronger trilateral cooperation.

Seoul and Tokyo have faced deteriorated bilateral ties in recent years, struggling to overcome disputes over historical issues stemming from Japan's 1910-45 colonial rule over the peninsula and an ongoing trade spat.

It noted that a “robust and effective trilateral relationship” between the three countries “is critical for our joint security and interests in defending freedom and democracy, upholding human rights, championing women’s empowerment, combating climate change, promoting regional and global peace, security, and the rule of law in the Indo-Pacific and across the globe.”

The two secretaries will spend Tuesday and part of Wednesday in Tokyo and hold a security consultative committee meeting with Japanese Foreign Minister Toshimitsu Motegi and Defense Minister Nobuo Kishi.

They will then arrive in Seoul later Wednesday, and Foreign Minister Chung Eui-yong and Defense Minister Suh Wook will host their U.S. counterparts Thursday for "two-plus-two" talks, an opportunity to discuss alliance matters and Korean Peninsula issues.

Blinken is set to head to Alaska later Thursday for talks with Yang Jiechi, director of China’s Office of the Central Commission for Foreign Affairs, and Wang Yi, the Chinese foreign minister and state councilor, while Austin heads to India Friday.

Japan announced export restrictions on Korea in 2019 and removed Korea from its so-called white list of most trusted trading partners. Tokyo initially claimed there had been a breach of trust and suggested the restrictions were due to security concerns, but the export measures are seen as retaliation against the Korean Supreme Court rulings in late 2018 ordering Japanese companies to compensate victims of forced labor during World War II.

In a tit-for-tat diplomacy, Seoul in August 2019 announced its decision to terminate its General Security of Military Information Agreement (Gsomia), a bilateral intelligence-sharing pact with Tokyo. Washington protested the move as it hindered its vision of trilateral cooperation in the region.

Korea eventually decided to conditionally keep its Gsomia with Japan in November 2019. Signed in November 2016, Gsomia had been renewed automatically every year unless either of the two countries decided to scrap the pact.

The Moon Jae-in government has been making attempts to extend an olive branch since the inauguration of the Yoshihide Suga administration last fall, but Tokyo has not responded to such gestures. Washington’s mediation in past administrations has encouraged dialogue during periods of high tension between Seoul and Tokyo.

The U.S. officials’ visit to Seoul is expected to be an opportunity for South Korean officials to be briefed on the Biden administration’s ongoing comprehensive review of its North Korea policy, anticipated to be completed in several weeks’ time, and also relay their positions in the process. It also comes ahead of the first talks between high-level U.S. and Chinese officials since the start of the Biden administration, so Seoul will also be observing closely how the Sino-U.S. rivalry plays out.

The Biden administration reached out to North Korea behind the scenes last month, but Pyongyang has been unresponsive, according to U.S. reports Sunday.

Reuters first reported Sunday that North Korea has not responded to the behind-the-scenes diplomatic outreach since mid-February by the Biden’s administration, “through several channels starting in mid-February, including in New York,” citing a senior Biden administration official.

CNN also reported Sunday that the Biden administration reached out to North Korea through multiple channels, citing a senior administration official, though so far Pyongyang has been unresponsive. The official said the outreach, including through the so-called New York channel, or North Korea's diplomatic mission to the United Nations, came last month “to reduce the risks of escalation" following a year without active dialogue.

Last Friday, U.S. President Joe Biden took part in the first virtual summit of the Quadrilateral Security Dialogue, or Quad, a security cooperation mechanism between the United States, Japan, India and Australia, seen as a way to contain China. The Quad leaders in a joint statement said they “are united in a shared vision for the free and open Indo-Pacific” and will “strive for a region that is free, open, inclusive, healthy, anchored by democratic values, and unconstrained by coercion.” They also committed to the “complete denuclearization of North Korea in accordance with United Nations Security Council resolutions.”