People 75 and older will be vaccinated starting next month, according to health authorities as they announced the second stage of Korea's vaccination program Monday, while teachers of younger students can expect to be inoculated earlier than expected.

The Korea Disease Control and Prevention Agency (KDCA) announced details of vaccinations for the second quarter, from April to June, which covers seniors 65 and over, high-risk groups, health care professionals and essential social workers. The government aims to inoculate a total of 12 million people during the first half of the year.

The KDCA said it aims to vaccinate 3.64 million people 75 and older, or those born before Dec. 31, 1946, during the first week of April. They can expect to receive Pfizer vaccines slated to be delivered later this month.

The first stage of vaccinations that kicked off on Feb. 26 targeted some 793,000 patients and workers at nursing homes and health care professionals treating Covid-19 patients. One large group, people 65 and older, were initially excluded from receiving AstraZeneca vaccine jabs over concerns over their efficacy at that age. Health authorities last week approved their use in that age group, citing studies in Britain and Scotland showing that it is effective in preventing serious illnesses and hospitalizations due to Covid-19.

Inoculations with the AstraZeneca vaccine of some 377,000 people 65 or older at nursing homes and convalescent hospitals that had temporarily been put off will begin next week.

People working at facilities with vulnerable populations including those for the disabled and correctional facilities will be among those to be vaccinated in the second week of April.

Teachers at day care centers, kindergartens and first and second grades of elementary school were also included in the second quarter as a high-priority group in an attempt to protect schools and child care facilities.

Some 51,000 instructors at educational facilities for children with disabilities will receive AstraZeneca vaccine starting next month, along with health care providers at day care centers, kindergartens and schools. Another 491,000 teachers of students in lowers grades and child care facilities will be vaccinated in June.

Flight attendants are among those who have been pulled up the prioritization list as well, and some 27,000 airline crew will be vaccinated in May. Essential social workers such as police, firefighters, and military personnel can also expect to receive shots by June.

Some 385,000 medical professionals and pharmacists will also be vaccinated during this period.

Likewise, around 2,400 military doctors and other healthcare providers in the military will be the first recipients in the military in the second quarter. The inoculations of 581,000 soldiers initially scheduled for the third quarter was pulled up to June in phases. They will get AstraZeneca vaccines.

President Moon Jae-in, 68, and first lady Kim Jung-sook, 66, will be vaccinated with the AstraZeneca on March 23, to participate in the Group of Seven, or G-7, summit in Britain in June, the Blue House said Monday, qualifying for “essential” overseas travel for diplomacy.

The general public under 65 can expect to be vaccinated in July, as the country aims for herd immunity by November.

Through an individual contract with the government, Pfizer is expected to deliver 500,000 doses starting March 22. 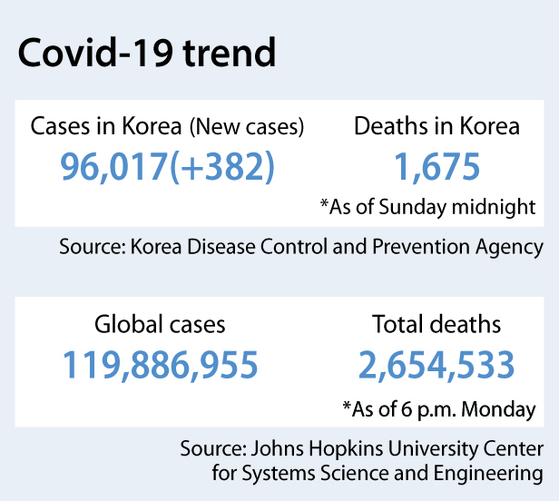 There have been 8,347 cases of side effects after vaccinations, generally mild symptoms. There were 76 cases of suspected anaphylactoid reactions.

There were 12 new imported cases amid concerns of more transmissible overseas variants, including four from the United States and three from Pakistan.

The KDCA reported 31 new variant cases, of which 24 were of the British strain and seven of the South African. This brings total variant cases to 213.

Of local transmissions, 112 were reported in Seoul, 161 in Gyeonggi and 18 in Incheon.

The Gyeonggi provincial government last week issued an administrative order for all 85,000 foreign workers in the province to get Covid-19 tests by March 22 in response to a spike in cases related to workplaces and factories with many foreign workers.

Illegal immigrants were also encouraged to get the free tests, and officials assured that their identities will not be disclosed. The Justice Ministry said it will temporarily suspend its crackdown on illegal sojourners.

Those who violate the administrative order can be punished up to 3 million won and be requested to reimburse the government for costs of testing, contact tracing and treatments. Workplaces found to have been violating social distancing regulations will be held responsible, said authorities.