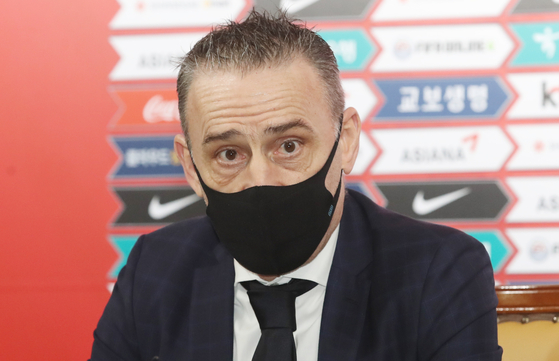 The Taeguk Warriors are set to face Japan on March 25 at Nissan Stadium in Yokohama, Japan. Speaking at a press conference after announcing his squad, Bento defended the decision to play an international fixture during the coronavirus pandemic.

"All members of our society are working in their respective fields, as far as circumstances allow them to do so," Bento was quoted as saying on Yonhap. "And although we're being affected by health and safety protocol, we'll have to do the best we can within those confines."

The Taeguk Warriors were last in action last November, when they played two friendlies in Austria. That ill-fated trip saw six members of the squad test positive for Covid-19 including key players like Hwang In-beom of Rubin Kazan and goalkeeper Jo Hyeon-woo of Ulsan Hyundai FC.

"Football must go on as long as rules are being followed," Bento said. "We'll abide by health and safety protocols. My understanding is that our medical team is trying to make sure we'll be in a much safer environment than in November."


Although Spurs striker Son, who normally captains the national team, was included in the squad, Bento acknowledged that the extent of a hamstring injury picked up against Arsenal on Sunday is still unknown. It is also unclear whether Tottenham would release Son — under FIFA rules teams can refuse to release players that will be required to quarantine for at least five days.

Other international stars including Beijing Guoan defender Kim Min-jae and Bordeaux forward Hwang Ui-jo were not released by their clubs and were therefore not included on the roster.