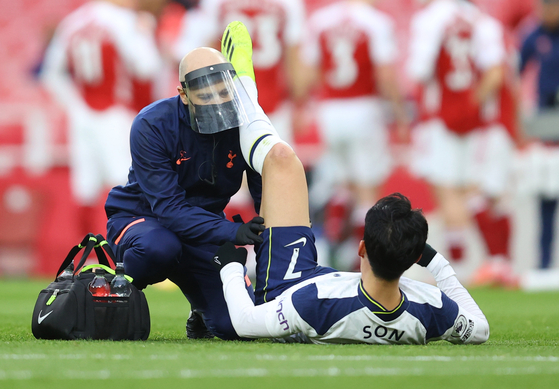 
Son Heung-min of Tottenham Hotspur suffered a hamstring injury during Spurs' North London derby against Arsenal on Sunday, potentially taking the star striker out of upcoming league and international fixtures.

Spurs' losses started long before either side scored on Sunday afternoon at Emirates Stadium in London, as Son went down with what appeared to be a pulled hamstring within the first 20 minutes of the game.

Son pulled up on the run in the 18th minute holding his leg, lying down on the grass in clear pain with Arsenal goalkeeper Bernd Leno walking over to try and help. Tottenham quickly sent their medical team onto the pitch and after a brief attempt to walk it off, Son was taken off the pitch and headed straight down the tunnel.

Son was replaced by Érik Lamela, who went on to score the opening goal for Spurs in the 33rd minute. Arsenal responded with an equalizer from Martin Odegaard in the 44th minute and then pulled ahead in the 64th with another from Alexandre Lacazette.

Lamela went on to pick up two yellow cards in ten minutes, receiving a red in the 76th minute to leave Spurs not only short Son, but now down to ten men as well.

Captain Harry Kane hit the post with a free kick a few minutes later, Spurs' last real chance at an equalizer in the North London derby. Tottenham were unable to convert in the dying minutes of the game, and Arsenal walked away with a 2-1 victory.

Son has made 41 appearances across all tournaments this season, scoring 18 goals and picking up 16 assists along the way. A hamstring issue, an unfortunately common injury for professional football players, after such a busy schedule doesn't come as a huge surprise.

Speaking after the game, Spurs' manager Jose Mourinho said he doesn't know when Son will be back at full fitness.

"That’s football, I don’t know how long it is," Mourinho said in a post-match press conference. "It's muscular. Muscular is always not easy.

"He’s a guy that normally he recovers very very well from any kind of injury. And that’s football."

Mourinho also mentioned how tiring Son's schedule has been this season.

"That’s accumulation of matches," Mourinho said. "In Europa League I gave him 30 minutes rest, so 90 minus 30 is 60, but 60 is still 60. And when you are in so many competitions, some players they have more minutes than others, which is normal, something that can happen."

If Son does have to sit out the next few games, his absence would be a huge blow to Spurs. So far this season Son, and in particular his partnership with Kane, have proven pivotal for the London club. The duo have combined on 14 English Premier League goals so far this season, a new league record.

Son's injury could also be a big blow to the Korean national team, due to play their first fixture of 2021 against Japan next week, on March 25.

Taeguk Warriors head coach Paulo Bento announced a provisional 24-man roster for the upcoming fixture on Monday, including captain Son's name on the list. At a press conference, Bento said that he provisionally included Son on the list because the extent of his hamstring injury is still unknown.

It is also not yet clear whether Spurs would actually be willing to release Son for the game. Under revised FIFA rules due to the coronavirus pandemic, clubs are not required to release players for international fixtures if players will be required to quarantine for at least five days upon their return. That temporary rule means that even if fit, Spurs could refuse to release Son depending on British quarantine regulations.