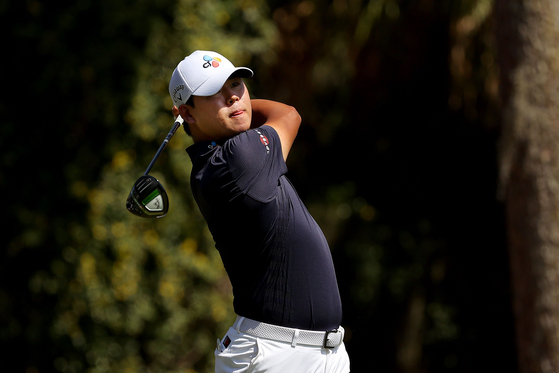 Kim Si-woo plays his shot from the second tee during the final round of The Players Championship at TPC Sawgrass on in Ponte Vedra Beach, Florida on Sunday. [AFP/YONHAP]


Kim Si-woo returned strong in the final round of The Players Championship to finish in the Top 10 on Sunday, while Im Sung-jae put in a good performance to finish tied for 17th a week before he defends his title at The Honda Classic.

Kim finished tied for ninth at The Players Championship, following a roller-coaster final round 1-under 71 with five birdies and four bogeys on Sunday at TPC Sawgrass in Ponte Vedra Beach, Florida.

The Players Championship is regularly referred to as golf's unofficial fifth major, and Kim has already seen success there, winning the 2017 Players Championship. Although he failed to repeat that success, Kim was named in the top 10 and awarded $338,375 from the pot.

After winning The American Express tournament in January, Kim fell into a slump and failed to make the cut three times over the last five competitions, missing one completely and tying for 50th at the one where he competed in all four rounds.

Kim put up a strong performance throughout the tournament, finishing every round without going over par. He had excellent shot accuracy and ranked second in greens hits and 12th in the greens hit rate.

The victory went to Justin Thomas of the United States, who had a 14-under 274 with four shots reduced. Thomas fired a 68 on the final round for a winning score of 14-under 274, with overnight leader Westwood returning a 72 to drop into second place.

After a disappointing 77 in the third round, Im produced his second 6-under round of the week with one eagle on the 11th hole, six birdies and a double bogey on the 15th.

"I was quite solid until the third round. But I think I was little greedy [on Saturday], and I lost my control mentally and did not play my own game," said Im. "Thankfully I recovered and had a good round and that makes me feel good."