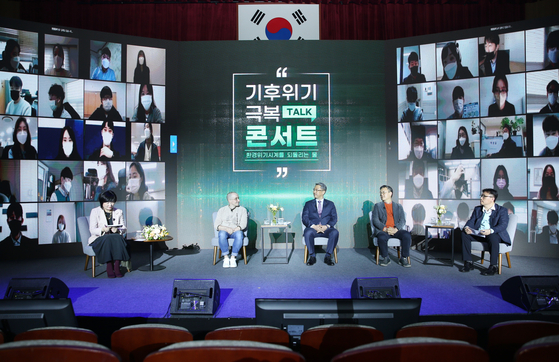 K-water's decision to focus on ESG is based on the growing awareness of the threat of climate change, which has been accelerating in recent years, including the worsening air pollution caused by desertification. Even Covid-19 is considered to be the result of climate change.

He said K-water will play a central role in achieving President Moon Jae-in's goal of making Korea carbon neutral by 2050.

K-water plans to increase its efforts in preventing water-related disasters while expanding use of renewable energies, including floating solar farms, and contributing to the development of cities that will be resilient to climate change.

K-water is the leading public company on floating solar farms. The goal is to become an RE100 company, which means the energy that the company uses is entirely from renewable energy sources.

Additionally, it hopes to contribute to society through a smart water grid. The water grid not only efficiently manages water distribution, especially helping people who struggle to access clean water.

It will also work with local communities in finding projects that local residents can participate in and earn money.

K-water plans to improve its governance structure by increasing the participation of local communities, including in dam management.

“K-water’s adoption of ESG management, following last year’s announcement of a management focus against climate change, is not a choice but a necessity not only for the survival of our company but a [greater] calling in a time of climate threat,” Park said. “We will take charge of the public’s water safety and welfare through ESG management that specializes in the value of water.”

Panelists at the conference included Jo Cheon-ho, the first head of the National Institute of Metrological Science, Tyler Rasch, a brand ambassador for the World Wildlife Fund, and Thomas Yoon, founder and CEO of Who’s Good, an ESG data provider, as well as teenager environment activist Kim Do-hyun.

The conference was held on YouTube due to Covid-19 restrictions.