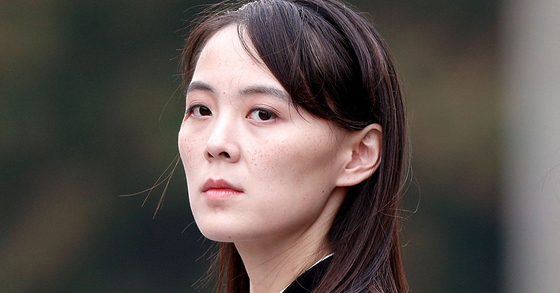 The North’s official media reported Tuesday that Kim Yo-jong, vice department director of the Central Committee of the ruling Workers' Party, said in a statement Monday that Washington “had better refrain from causing a stink at its first step” if “it wants to sleep in peace” for the next four years.

It was Pyongyang’s first direct message to the new U.S. administration of Joe Biden.

Her remarks came on the eve of a visit by U.S. Secretary of State Antony Blinken and Defense Secretary Lloyd Austin to Seoul Wednesday.

Kim accused Seoul of opting for a "war in March,” alluding to joint military exercises. She warned South Korean authorities that they have crossed the “red line” by seeking confrontation in the statement carried by the North’s state-run Korean Central News Agency and the Rodong Sinmun.

She was protesting the annual springtime joint military exercise between Seoul and Washington that kicked off on March 8 and will run through Thursday. The computer-simulated drills were held in a scaled down manner this year due to the Covid-19 pandemic and did not involve outdoor maneuvers.

“We will watch the future attitude and actions of the south Korean authorities,” said Kim. “And if they dare resort to more provocative acts, we may take a special measure of resolutely abrogating even the north-south military agreement.”

The inter-Korean comprehensive military agreement was signed by the two countries’ defense ministers on Sept. 19, 2018, during a summit between President Moon Jae-in and Kim Jong-un in Pyongyang and aims to reduce border tensions.

Kim Yo-jong also threatened to dissolve the Committee for the Peaceful Reunification of the Country, the Workers' Party agency in charge of inter-Korean dialogue, saying it has “no reason for its existence.”

Kim reiterated the Central Committee’s stance that “whether the inter-Korean relations return to the new starting point of peace and prosperity as witnessed in those spring days three years ago or not depends on the attitude of the south Korean authorities.”

She was referring to a period of détente on the Korean Peninsula following the PyeongChang Winter Olympics in February 2018, which led to a series of inter-Korean and North-U.S. dialogues that have been stalled since 2019. Amid North-U.S. denuclearization talks, large-scale exercises between Seoul and Washington were postponed or scaled down.

In her statement, Kim dismissed Seoul and Washington’s argument that the combined exercise was “reduced” in size and noted that the North opposes the joint military drills in themselves and “never argued about their scale or form.”

Kim noted Seoul had chosen a "crisis in March" instead of "warmth in March” and said that the issue of joint drills “might become the last chance for repairing” inter-Korean relations.

She last issued a statement lambasting the South over two months ago, on Jan. 12.

Last June, North Korea blew up the inter-Korean liaison office in Kaesong, the sole fixed communication office between the two countries. The demolition came days after Kim issued a statement warning that North Korea would blow up the office to protest the launching of anti-Pyongyang leaflets across the border by defectors in the south.

Analysts said the timing of the statement suggested a calculated move as it came near the end of the military drills and right before the Biden administration officials’ visit to East Asia.

North Korea has been hesitant in directly criticizing the Biden administration since its launch in January, likely gauging its strategy toward Pyongyang. The Biden administration is currently conducting a comprehensive review of its North Korea policy, anticipated to be completed in several weeks. South Korean officials are expected to give their input during Blinken and Austin’s trip.

The White House on Monday confirmed reports that the Biden administration had reached out to North Korea through multiple channels, including its diplomatic mission to the United Nations in New York, in mid-February.

"I can confirm that we have reached out,” said Jen Psaki, the White House spokesperson, in a briefing, confirming that Washington has “a number of channels, as we always have had, that we can reach out through.”

She added, “This follows over a year without active dialogue with North Korea, despite multiple attempts by the U.S. to engage.”

Psaki said, “Diplomacy is always our goal. Our goal is to reduce the risk of escalation.  But, to date, we have not received any response.”

She said the administration has been consulting with former government officials who had been involved in North Korea policy and “will continue to engage with other Japanese and South Korean allies to solicit input, explore fresh approaches.”

Seoul’s Unification Ministry, in response to Kim’s statement, stressed that the joint drills should not be used as an opportunity to escalate tensions on the Korean Peninsula.

“There is no change in our position that inter-Korean relations should be improved at an early date and denuclearization dialogue should be resumed as soon as possible,” a Unification Ministry official told reporters Tuesday. “The government will work towards enabling the drills to be carried out in a way that will contribute toward the Korean Peninsula peace process.”