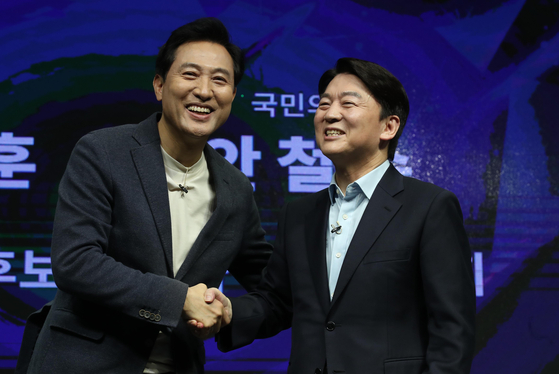 Seoul mayoral candidates Oh Se-hoon, left, of the People Power Party and Ahn Cheol-soo of the People's Party shake hands after announcing their visions for the opposition parties' plan to field a consolidated candidate in the April 7 Seoul mayoral by-election on Monday. [YONHAP]


In a bid to become the opposition's unified candidate in the Seoul mayoral race, Ahn Cheol-soo said Tuesday he will merge his minor party with the main opposition party if he wins the April by-election.

Ahn's hypothetical win would result in a push to combine his People’s Party (PP) with the People Power Party (PPP).

“I want to become the mayor of Seoul, gain support from members of the PP and push forward a merger with the PPP,” Ahn said in a press conference at the National Assembly. When asked if he would still be willing to merge his party with the PPP even if he fails to win the opposition primary, Ahn said he is.

Ahn, a two-time failed presidential contender, is currently competing against the PPP’s contender Oh Se-hoon, a former two-term Seoul mayor, in the opposition primary. A two-day public opinion poll on Wednesday and Thursday will designate the unified opposition candidate to face Park Young-sun of the ruling Democratic Party (DP) in the April 7 by-election.

Ahn’s surprise proposal for the party merger was announced six hours before his TV debate against Oh later on Tuesday and just one day before the primary poll begins.

“A grand merger of the opposition parties is a sure way to expand the accomplishments of the candidate consolidation and to pave the path to win next year’s presidential election,” Ahn said.

“I hope the fake news, that I will end up splitting the conservative opposition by abandoning the PPP after winning the opposition primary to become a unified candidate and start a third party with former Prosecutor General Yoon Seok-youl, will disappear.”

Political experts said Ahn’s proposal for a party merger is intended to attract PPP voters ahead of the candidate consolidation poll. In previous public opinion polls, Ahn was ahead of Park in a two-way race, but Oh’s popularity recently strengthened.

In a Realmeter poll commissioned by the Munhwa Ilbo, conducted on Saturday and Sunday and announced Monday, Oh was ranked as a frontrunner if the opposition fails to field a unified candidate and both Ahn and Oh run against Park in a three-way race.

According to the poll, Oh would score 35.6 percent, Park 33.3 percent and Ahn 25.1 percent if all three of them run for Seoul mayor. It was the first survey for Oh to be rated as a frontrunner in the three-way race.

If Oh runs as the unified opposition candidate against Park in a two-way race, Oh would score 54.5 percent and Park 37.4 percent, the poll showed.

If Ahn runs against Park in a two-way race, Ahn will score 55.3 percent and Park 37.8 percent, the poll said.

When asked which candidate they support as a consolidated opposition contender, Oh was backed by 39.3 percent and Ahn 32.8 percent.

Oh responded to Ahn’s proposal for a party merger, saying, “You must start the party merger right now, starting today. Why would you have to merge the party after candidate consolidation?”

Oh recommended a better method: “Ahn can join the PPP first and then merge the two parties,” Oh said.

In January, Oh urged Ahn to join forces with the PPP, promising that he won’t run if Ahn does. “Please join the PPP," Oh said, addressing Ahn in a press conference at the time. "If you decide to merge your party with the PPP, that is even more desirable."

“Ahn had rejected Oh’s earlier offer,” an aide to Oh said Tuesday. “But he suddenly proposed the party merger one day before the opinion poll. We have every reason to be skeptical of Ahn’s intention.”

Ahn and Oh are scheduled to participate in an 80-minute TV debate starting 5:30 p.m. on Tuesday. An opinion poll will take place on Wednesday and Thursday, and the primary candidate to run in the Seoul mayoral race will be announced Friday.

As of Tuesday, however, the two sides were still negotiating the details of the opinion poll, such as which questions should be used in the survey.