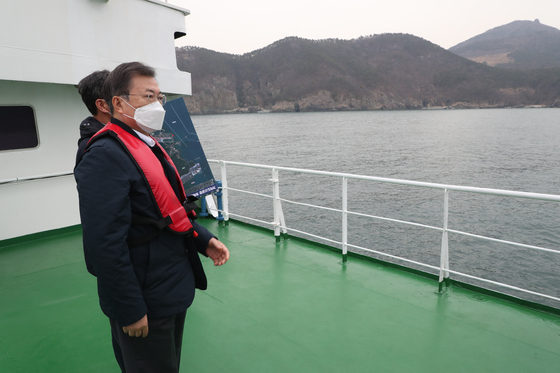 In this file photo from Feb. 25, President Moon Jae-in looks at Gadeok Island, the site of a new airport near Busan. [YONHAP]


President Moon Jae-in did not violate his political neutrality by attending events touting Busan’s future as a megacity last month and promising support for a new airport, the election watchdog concluded.

Following Moon’s high-profile visit to Busan on Feb. 25, the main opposition People Power Party (PPP) cried foul and asked the National Election Commission (NEC) to rule on its legality just a few weeks before a crucial mayoral by-election in Busan. In a response to Rep. Lee Yong of the PPP, the NEC said Moon had not violated his duty to maintain political neutrality, the JoongAng Ilbo learned Monday.

Moon and an entourage of political bigwigs spent the day in Busan on Feb. 25 and attended a presentation jointly hosted by the Presidential Committee for Balanced National Development and the local governments of Busan Metropolitan City, Ulsan Metropolitan City and South Gyeongsang Province. Leaders of the ruling Democratic Party (DP) and top officials of the administration accompanied Moon.

The highlight of Moon's visit was a tour of the site of the new airport, planned to be built on Gadeok Island. The project, shelved by the Park Geun-hye administration, was revived by Moon's administration in November.

The presidential visit to Busan, his first in a year, took place six weeks before the country's second-largest city was scheduled to elect a new mayor on April 7. Last year, Busan Mayor Oh Keo-don, the first DP politician ever to win the post, resigned after admitting to sexually molesting a City Hall employee.

The PPP's candidate in the by-election is Park Heong-joon, an ally of former President Lee Myung-bak, and the DP's candidate is Kim Young-choon, a former maritime minister for the Moon government.

During the visit, Moon made a series of controversial remarks, particularly concerning the administration’s project to build a new airport on Gadeok Island near Busan. “My heart is beating fast as I see the new airport site,” Moon said.

The PPP complained that Moon was intervening in the by-election. It said Moon abandoned his constitutional duty to maintain political neutrality and his attempts to influence the election were grounds for impeachment.

Asked if Moon had violated his duty to maintain political neutrality, the NEC replied to Rep. Lee: “The president, the highest decision-maker of the state affairs, visited the region as a part of his job.”

The NEC added that attending a presentation on a regional development project and promising the support of the central government, without any expression of support for or opposition to a particular political party or a candidate, cannot constitute a violation of the Public Official Election Act.

According to Article 9 of the act, a public official or a person who is required to maintain political neutrality shall not exercise any unreasonable influence over the election or perform any act likely to have an effect on an election result.

During his visit, Moon said the new airport project was his “long-cherished wish,” and that he wanted the ruling party to pass a law as soon as possible to start the project. He also publicly scolded Land Minister Byeon Chang-heum for having protested the plan.

The next day, the DP used its majority and passed a special law to expedite construction of the airport.

The PPP challenged the NEC’s conclusion that Moon had maintained political neutrality during his Busan visit.

“Moon’s remarks were, in other words, a promise of a new airport,” Rep. Lee said. “The president tried to buy votes ahead of the Busan mayoral by-election, and the NEC’s conclusion is regrettable.”

The PPP has been complaining that the NEC is politically biased. It said the watchdog’s key members such as Cho Hai-ju are allies of Moon and the DP.