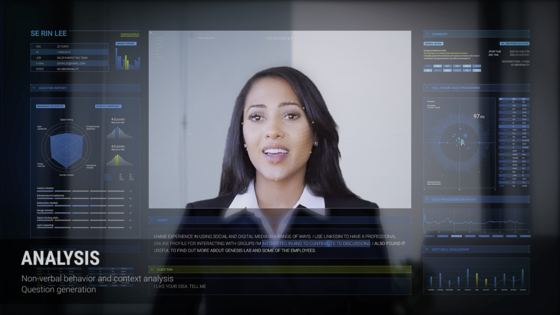 An image of an interview program from Genesis Lab [GENESIS LAB]


Human resources managers at LG U+ were surprised with the results of the company’s open recruitment last year.

Candidates who scored well when being judged by a computer also did well in face-to-face interviews with executives.

More Korean companies are now turning to programs to help handle various steps in the hiring process, from evaluating resumes and autobiographical essays to conducting and assessing interviews.

KT is currently hiring a total of 300 new interns and experienced workers until March 29. The company announced that it will utilizing HR technology in evaluating resumes. Programs will evaluate abilities and personalities based on resume analysis, as well as identify whether the papers are plagiarized or not.

Genesis Lab, a software developer in Korea, offers its an interview solution to many big Korean companies, including LG Electronics and LG U+ as well as public institutions such as Seoul Metropolitan Government.

Midas In, a subsidiary of software developer Midas IT, offers an interview solution to some 450 companies in Korea, including Hanmi Pharmaceutical and JW Pharmaceutical, to be used in their hiring process. 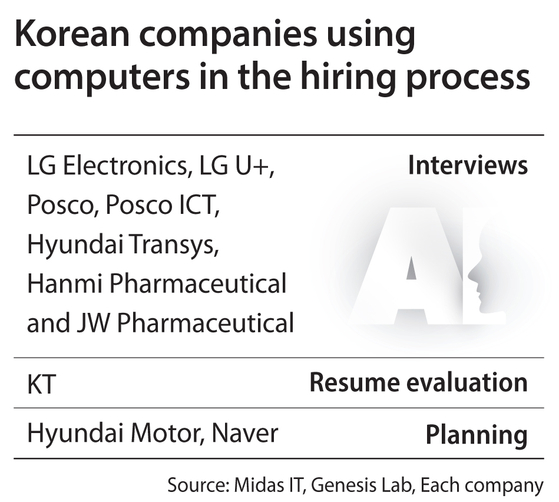 Solutions used vary by company. Genesis Lab’s Viewinter HR Solution records interviews and has experts evaluate it. The experts include professionals, who have worked as human resources managers at large companies, such as Samsung and LG.

According to Midas In, its test is more focused on applicant potential for future growth. The system collects data from employees who have achieved high performance in particular companies. Then the computer recruiter compares the results between applicants and the existing employees to figure out who are the most suitable candidates for the companies.

Posco ICT has developed its own technology and it has been used in hiring process of Posco and Posco ICT. The system recognizes facial movements during the interviews and clarifies if the interview participants are the real applicants. It also analyzes the facial expression and the terms that the applicants used most frequently to identify their personality and talent.

Experts argue that the interview systems should be improved.

“As unemployment issue is becoming more serious in Korea, more applicants are raising doubts over the fairness of the hiring process,” said Oh Sung-eun, an expert advisor at Seoul National University’s Career Development Center. He says that the credibility and validity of hiring systems should be improved by examining the performance of those hired.

The interviews analyze non-verbal responses via video, so it automatically excludes candidates who don’t interview well on camera, Ko said. “The process itself can raise public’s doubts in terms of its fairness and ethicality.”