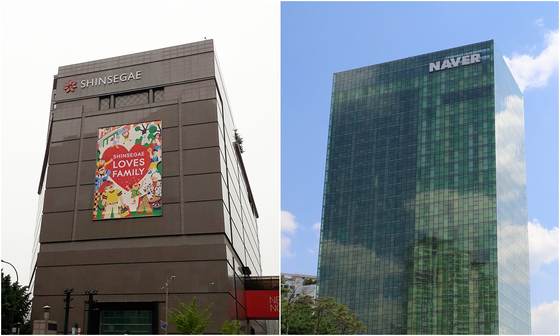 
The Emart-Naver stock swap is the latest step in the building of a dominant e-commerce player that may be able to fend off recently-listed Coupang.

“Naver is projected to enjoy a competitive superiority over Coupang [from the stock swap],” Lee Jee-young, an analyst at NH Investment & Securities, said.

The transaction comes just days after Coupang listed on the New York Stock Exchange in a wildly successful IPO that left it with a market capitalization greater than that of Hyundai Motor.

Naver, which operates Naver shopping, controlled 17 percent of the e-commerce market last year, followed by Coupang’s 13 percent, according to data from Statistics Korea and the Kyobo Securities research center.

As part of a deal last year, Naver owns 7.85 percent of CJ Logistics, 5 percent of CJ ENM and 6.26 percent of Studio Dragon, while the CJ companies each gained small shareholdings in Naver.

While the companies have not said exactly how they will work together, Emart and Shinsegae International could benefit from Naver’s user base by intensifying content marketing, like live commerce, on the Naver platform. Live commerce is a hugely successful sales format whereby customers are able to chat with an infomercial.

They could also work with Naver-connected companies. Naver has been aggressively seeking out partnerships. It is the largest shareholder of Mesh Korea, which offers last-mile delivery services.

Naver, which is currently centered on selling industrial products, could expand the categories it sells to more profitable products, like luxury items, and diversify more into groceries, which has been one of its key areas of weakness.

As of last year, 15 to 17 percent of luxury items were globally traded online, and the figure is projected to go up to 30 percent by 2025, according to a report from NH Investment & Securities.

The company could also make use of Emart and Shinsegae offline stores by offering verified individual vendors on its open market a chance to sell products at these locations.

Analyst Joo Yeong-hun from Eugene Investment said Naver can boost transactions made on Naver Pay by allowing the payment to be used at Shinsegae and Emart stores.

“It will be an opportunity for Naver Pay to expand its use to offline channels, which hasn’t been easy,” said Joo.

He added, “Specific strategies they roll out will have to be observed, but from whichever angle of thought, [the stock swap] is seen as a win-win decision.”

On Wednesday, Shinsegae International’s share jumped 6.11 percent in intra-day trading. But it closed 2.44 percent up from the previous trading day at 209,500 won ($175).

Coupang shares have been declining since the IPO. On Wednesday, the company’s stock closed at $47.13, down 6.58 percent from the previous trading day.