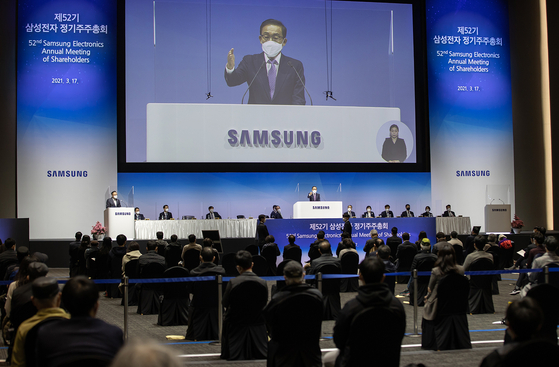 
Samsung Electronics tried something a little different at its 52nd annual shareholder’s meeting on Wednesday, broadcasting the session live online and giving retail investors a proper, countable vote on all issues for the first time.

All four items on the agenda passed the vote, including the re-appointment of board members and a three-year dividend plan to return 9.8 trillion won ($8.7 billion) to investors, annually.

More than 900 investors were present at Wednesday’s event in a convention center in Suwon, Gyeonggi. This was more than double the attendance of last year’s meeting, which took place right after the Covid-19 outbreak.

As of late 2020, Samsung Electronics had more than 2.15 million investors, which represents a threefold growth compared to 2019. Behind that increase is a general influx of private investors over the past year, notably younger Koreans.

In recognition of that new generation, Samsung decided to change some of its old customs this year.

At Korean shareholder meetings, clapping is commonly used for private investors to signal approval, in lieu of an actual vote. It was a formality to save time, and a proper vote was only called if retail investors strongly protested the issue.

This year, the clapping disappeared. Instead, the electronics company handed out personal devices to receive votes. The results were immediately shared on a large screen.

For those that could not attend the session in person, Samsung received electronic votes the previous day as it did last year. Private investors that requested access beforehand were able to watch the shareholders’ meeting live on Samsung’s website. Questions left in the bulletin board were later answered by company executives.

Designated seats were placed 2 meters away from one another in the conference hall, in line with social distancing guidelines.

The company’s three business division heads — chips, home electronics and phones — were all approved to remain on the board.

“Despite the difficult business environment due to the Covid-19 pandemic, Samsung Electronics managed to raise 237 trillion won in sales and 36 trillion won in operating profit last year,” said Kim Ki-nam, vice chairman and head of the display and semiconductor division.

Civic groups rallied outside the shareholders’ meeting on Wednesday, calling for imprisoned Lee Jae-yong, the company's honorary Vice Chairman, to be completely blocked from engaging in Samsung's business.

Currently serving a 30-month jail sentence for bribery and other offenses, Lee was informed by the Justice Ministry last month that he is barred for five years from working at a public institution or at any entity connected with the crime.

Lee is not a board member and has not received compensation from Samsung Electronics since 2017, when the court began hearing the case against him. But as the head of the conglomerate's owner family, Lee holds the honorary vice chair position and had been involved in core decision making.

When asked about this, Kim said the company would make “a comprehensive decision” based on Lee’s “role in establishing a global network and making decisions on future businesses, as well as the company’s circumstances and domestic laws.”