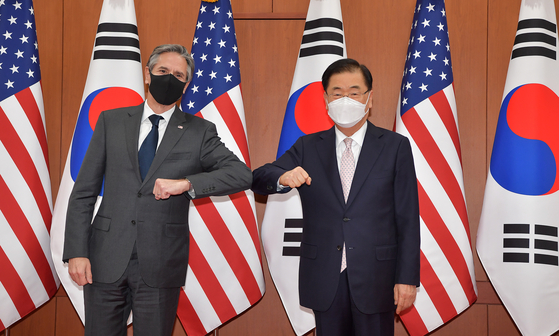 U.S. Secretary of State Antony Blinken, left, and South Korea’s Foreign Minister Chung Eui-yong, right, pose for a photo in the Foreign Ministry in central Seoul on Wednesday before they held a meeting. [JOINT PRESS CORPS]


U.S. Secretary of State Antony Blinken and Defense Secretary Lloyd Austin touched down in Seoul Wednesday, kicking off the first such joint visit to the country in 11 years to coordinate North Korea policy and work on alliance issues.

The secretaries flew in separately after a three-day trip to Tokyo earlier that day, with Austin arriving around noon at Osan Air Base in Pyeongtaek, Gyeonggi, on a Boeing E-4B Nightwatch aircraft. Blinken arrived at Osan around 2:40 p.m. also by a private jet.

Blinken and Austin’s joint visits to Japan and South Korea are the first overseas trips by members of the Joe Biden cabinet and are meant to represent Washington's recommitment to its allies and its intentions to pressure China amid intensifying Sino-U.S. rivalry.

It marked the first time that that America's top diplomat and Pentagon chief visited Seoul together since July 2010, when Secretary of State Hillary Clinton and Defense Secretary of Robert Gates made a trip to mark the 60th anniversary of the outbreak of the 1950-53 Korean War.

During his first in-person meeting with Suh, Austin stressed that the Seoul-Washington alliance has “never been more important” amid the unprecedented challenges posed by North Korea and China.

He stressed that the U.S. commitment to the 70-year-old alliance is “ironclad,” describing it as a linchpin for peace, security and prosperity for Northeast Asia.

Suh told Austin that his visit is a testament that “the Biden administration holds the Korea-U.S. alliance in high regard.”

Blinken at the beginning of the meeting with Chung stressed that the unwavering Seoul-Washington alliance is “ironclad, and it’s rooted in friendship and mutual trust and in shared values.”

He added, “I’m looking forward to working very closely together to continue to strengthen what is an indispensible alliance.”

Blinken pointed to a “dangerous erosion of democracy” in Asia, calling out China’s rising assertion in the region and the situation in Myanmar.

He also stressed the shared challenge of North Korea’s nuclear weapons and ballistic missiles program and went onto call out Pyongyang on its human rights abuses.

“The authoritarian regime in North Korea continues to commit systemic and widespread abuses against its own people,” said the top U.S. envoy. “We must stand with the people who demand fundamental rights and freedoms and against those who oppress them.”

Blinken added, “For decades, the alliance between the United States and Republic of Korea has ensured the security holding in our region, and I think it’s our job not only to maintain our alliance but to strengthen it so that we continue to provide that foundation for decades to come.”

Chung expressed hopes that the partnership will “develop into a more sound, mutually beneficial and comprehensive alliance." He also said he hopes that President Moon Jae-in and U.S. President Joe Biden will hold a summit in the near future.

Chung and Suh will host their U.S. counterparts Thursday morning for the so-called two-plus-two meeting, the fifth of its kind, the following day. They are scheduled to hold a joint press conference afterwards. There will especially be interest on what sort of message on North Korea will be conveyed by the U.S. officials.

The last "two-plus-two" foreign and defense ministers’ meeting was held over four years ago in October 2016 in Washington.

Seoul and Washington will sign the 11th Special Measures Agreement Thursday morning, after the two sides agreed to renew their defense cost-sharing deal after 18 months of negotiations. Earlier this month, Korean and U.S. negotiators agreed to a six-year deal, with Korea paying in 2021 a 13.9 percent increase from 2019. Korea is expected to pay more over the next four years from 2022 to 2025 at a rate that mirrors increases in Seoul’s own defense spending compared to the previous year.

Blinken and Austin are set to pay a courtesy call on President Moon Jae-in at the Blue House Thursday afternoon.

Suh Hoon, the director of the Blue House National Security Office, will meet separately with Blinken and Austin “for discussions on the South Korea-U.S. alliance, the Korean Peninsula issue as well as other regional and global affairs,” said Kang Min-seok, the Blue House spokesman, in a briefing Wednesday.

Later Thursday, the secretaries are scheduled to pay respects to Korean War casualties at the Seoul National Cemetery, southern Seoul. Blinken will also hold a virtual roundtable with Korean youth leaders and young journalists to discuss the importance of the bilateral alliance.

On Thursday evening, Blinken departs for Anchorage, Alaska for talks with Yang Jiechi, director of China’s Office of the Central Commission for Foreign Affairs, and Wang Yi, the Chinese foreign minister and state councilor. Austin heads to India Friday. 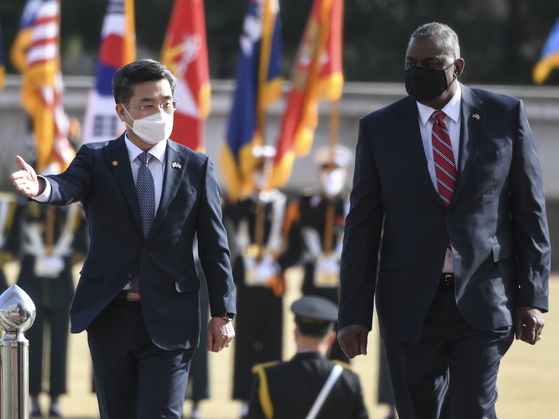 Defense Minister Suh Wook, left, and Defense Secretary Lloyd Austin, head into bilateral talks at the Defense Ministry in central Seoul after a ceremony welcoming the Pentagon chief who flew into Korea from Japan earlier that day. [NEWS1]

In a joint press conference in Tokyo, Blinken said, “We’re united in the vision of a free and open Indo-Pacific region, where countries follow the rules, cooperate whenever they can, and resolve their differences peacefully. And in particular, we will push back if necessary when China uses coercion or aggression to get its way.”

He continued, “This will be the message we reiterate later this week in Seoul.”

Just ahead of Blinken and Austin’s trip to the region, Kim Yo-jong, the powerful younger sister of North Korean leader Kim Jong-un, told the Biden administration in a statement reported in the North’s state media Tuesday to “refrain from causing a stink at its first step.” She threatened that Pyongyang could scrap a 2018 South-North military agreement in protest of annual joint military drills between Seoul and Washington.

Blinken avoided commenting directly on Kim’s threats but said in Tokyo, “We’ve engaged bilaterally with our Japanese and South Korean allies when it comes to North Korea. We’ve also done it trilaterally, and that continued trilateral engagement and cooperation will be, in my judgment, very important going forward.”

Austin likewise stressed American commitment to the denuclearization of North Korea, enhancing alliance capabilities, and “addressing aggressive and coercive behaviors from China, especially in the South and East China Seas.”

Blinken and Austin could also push Seoul to take into consideration the Quad alignment as it pushes to strengthen trilateral cooperation with Tokyo.
Last Friday, U.S. President Joe Biden held the first virtual summit with other leaders of the Quadrilateral Security Dialogue, or Quad, a security cooperation mechanism among the United States, Japan, India and Australia, seen as a way to contain China.

In a joint contribution to the Washington Post published Monday, Austin and Blinken wrote they will "strategize together on how to confront shared threats such as North Korea's nuclear weapons and ballistic missile programs” with Seoul and Tokyo, underscoring that the “Indo-Pacific region is increasingly the center of global geopolitics.”

They stressed that a free and open Indo-Pacific region, “anchored by respect for human rights, democracy and the rule of law,” is “a goal that Japan, South Korea and the United States share, and we will work together closely to achieve it.”

However, relations between Seoul and Tokyo have been seriously strained  in recent years by historical issues stemming from Japan’s 1910-45 colonial rule over the peninsula, hindering Washington’s vision of close three-way cooperation. The Moon Jae-in has been making attempts to offer an olive branch and separate history issues from other areas that Seoul and Tokyo can cooperate on.

Foreign Minister Chung last Thursday sent a consolation letter to his Japanese counterpart Motegi on the 10th anniversary of the devastating earthquake, tsunami and nuclear plant accident in east Japan on March 11, 2011. The letter offered solace to the Japanese people, acknowledging the sorrow they have suffered from the disaster. Seoul’s Foreign Ministry confirmed Wednesday that Motegi sent a reply to the message the previous day.