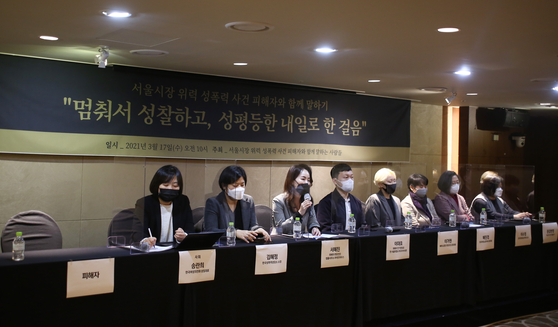 Seo Hye-jin, the lawyer representing the victim of sexual harassment by former Seoul Mayor Park Won-soon, speaks at a press conference at T-Mark Hotel in central Seoul on Wednesday. [NEWS1]


The victim of sexual harassment by former Seoul Mayor Park Won-soon held a press conference on Wednesday in her first appearance before the press.

At the conference at T-Mark Hotel in central Seoul, the victim, who was the late mayor’s former secretary, decried continued abuse and denials issued by supporters of the late mayor.

“His power made it impossible to speak out against his wrongdoings,” the victim wrote in an opening statement read by Song Lan-hee, head of the Korea Women’s Hot Line. “His power makes it possible for people who do not acknowledge his wrongdoings to continue to torment me after he left this world.

“Even now, his power continues.”

The former secretary filed a complaint with the police on July 8 of last year claiming that Park sexually harassed her for years and that her coworkers turned a blind eye to his conduct.

Park found out about the former secretary’s intention to submit a police complaint a few hours before it was filed from his special adviser on gender equality, according to prosecutors. Park went missing the next day and was found dead on July 10.

After the police investigation closed due to the death of the suspect, the victim requested an investigation by the National Human Rights Commission of Korea, which in January concluded that Park did sexually harass the former secretary.

The victim sat at the far left end of the podium for the entirety of the conference, out of the view of the camera livestreaming to YouTube. Prior to entry, members of the media were required to sign statements promising not to film or photograph the victim.

Also speaking in attendance on the podium were Seo Hye-jin, the victim's lawyer, Kim Hye-jeong, head of the Korea Sexual Violence Relief Center, and the victim’s former colleague and former Seoul City media secretary Lee Dae-ho, among others.

When it came time for the victim herself to take the microphone after the other speakers finished their comments, press in the room were told to turn off their cameras and recording devices. The YouTube livestream video was also replaced with a transcript of her speech.

Speaking directly to the media, the victim pleaded for people who continue to raise doubts about her harassment allegations to stop.

“Mayor Park forfeited his right to defend himself. If he had lived, he could have exercised his right to self-defense through the legal process, and the truth of this case would have become clearer,” the victim said.

“I have struggled to escape from those who distorted the facts about my suffering and the secondary abuse which ensued. However, what is undeniably true from the beginning to the end of this case is that I am the victim.”

In a Q. and A. exchange with reporters at the conference, the victim said she felt compelled to speak out in person because of the upcoming Seoul mayoral by-election, the winner of which will occupy the seat vacated due to Park’s death.

“There are a lot of people in the Democratic Party [DP]’s mayoral campaign who hurt me. They attempted to minimize my pain by calling me ‘the alleged victim’ and tried to pressure me into silence to protect his legacy,” the victim said.

“I am afraid that I may not be able to go back to normal if the new mayor is elected from the political party which distorted the truth of my suffering.”

The victim called on the DP’s mayoral candidate Park Young-sun to discipline members of her campaign camp who called her “the alleged victim.” In particular, she demanded that National Assembly Rep. Nam In-soon, who is one of Park’s chief campaign managers, be made to resign.

“Rep. Nam has inflicted personal pain and social damage from which I can almost never recover. She must be made to take political responsibility.”

Nam was allegedly the first to suggest calling the former secretary “the alleged victim” in a chat group for female lawmakers. After remaining silent on her role in creating the label after the victim spoke out against it last summer, she apologized in January.