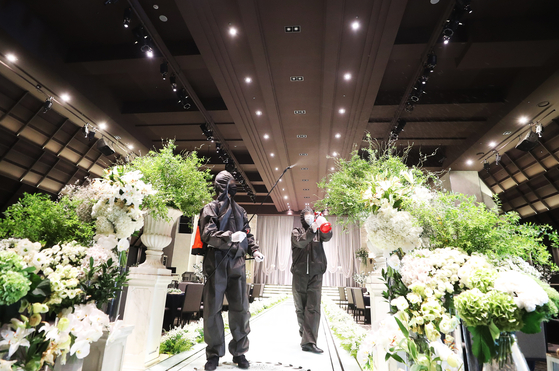 Employees sanitize a wedding hall in Suwon in August 2020. [YONHAP]


“I’ve kept delaying [the wedding] because of Covid-19,” said a woman who finally got hitched in December after a number of postponements.

She is one of the lucky few, as many couples in Korea have been forced to delay their nuptials until the pandemic passes. She was still only able to hold a ceremony with a few guests, while the rest attended virtually via Instagram.

Covid-19 had a huge impact on marriages, which dropped to a record low in 2020. Divorces are also down, to the lowest level since the 1997 crisis.

According to Statistics Korea on Thursday, last year 214,000 couples took their wedding vows. That’s a 10.7 percent drop compared to the previous year, or 26,000 fewer.

It is the smallest number of newlyweds since related data were first recorded in 1970.

The last time marriages dropped at such a rate was more than two decades ago when the country was shaken up by the Asian financial crisis.

The number of married couples has been steadily shrinking since 2012, largely due to the overall population decline. Last year, Covid-19 forced more couples to reconsider their wedding vows.

“One of the reasons that the number of married couples has been falling is largely because the number of people in their 30s has been shrinking,” said Kim Su-young, head of the Statistics Korea’s population census division. “Also there has been a change in views regarding marriage, as fewer people consider it a good idea. There is an increase of people who either postpone their marriage plans or plan on remaining single affected by several factors, including economic reasons, housing costs and careers.

“There were many cases where people postpone or called off their weddings because of Covid-19,” Kim said.

Marriages between foreigners and Koreans last year totaled 15,000, which is a 35.1 percent drop from the previous year. This is the sharpest decline recorded.

According to the statistics agency, last year foreigners immigrating to Korea to get married plummeted 71 percent year-on-year.

In 2019, such marriages accounted for nearly 10 percent of all marriages reported in Korea. That ratio dropped to 7.2 percent in 2020.

Last year Vietnamese women ranked top among foreign women that married Korean men, as they accounted for 28.3 percent, followed by Chinese women at 22.7 percent and Thai women at 15.6 percent.

American men topped the list among those married to Korean women at 26 percent, followed by Chinese men at 22.2 percent and Vietnamese men at 11.8 percent.

Covid-19 has also had an impact on divorce.

This is a turnaround from the recent trend, where the number of divorces has been growing annually since 2018.

“While a new word ‘Covidivorce’ has been coined as couples split due to conflicts that emerged from spending too much time together at home due to Covid-19 restrictions, in Korea the situation has been completely opposite,” said the statistics agency official Kim. “We believe conflicts regarding family issues especially during the national holidays [Lunar New Year and Chuseok] has dropped.”

Usually the number of divorces spike around the two national holidays, especially as women are stressed out preparing food while the men lounge about with relatives. Issues regarding relatives during the holidays also drive divorce.