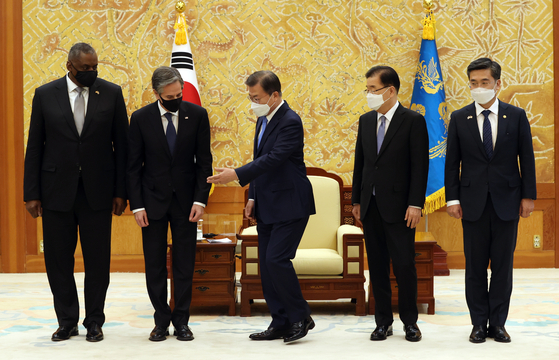 
China has a "critical role” to play in persuading North Korea to denuclearize, stressed U.S. Secretary of State Antony Blinken, while simultaneously calling out Beijing for actions that threaten regional stability during a joint press conference with the Pentagon chief and their South Korean counterparts in Seoul Thursday.

On the Joe Biden administration’s goals for Pyongyang, Blinken said, “We are committed to the denuclearization of North Korea, reducing the broader threat the DPRK poses for the United States and our allies, and improving the lives of all Koreans, including the people of North Korea, who continue to suffer widespread and systematic abuses at the hands of their repressive government,” referring to the acronym for the North's official name, the Democratic People's Republic of Korea.

Beijing has “a clear self-interest in helping to pursue the denuclearization of the DPRK because it is a source of instability, it's a source of danger, and obviously a threat to us and our partners,” said Blinken.

He noted that since virtually all of North Korean trade goes through China, Beijing is “unique” in that it “has tremendous influence” over Pyongyang. He urged China to “use that influence effectively” to deal with Pyongyang’s nuclear and ballistic missile programs.

The top U.S. diplomat criticized Beijing for rising assertiveness, saying its “aggressive and authoritarian behaviors are challenging the stability, security and prosperity in the Indo-Pacific region,” an issue that he said he discussed with Seoul officials.

“We are clear-eyed about Beijing’s consistent failure to uphold its commitments,” said Blinken. “Beijing’s actions make forging a common approach among our allies all the more important at a time when we are seeing a rollback of democracy and human rights around the world.”

Unlike in a similar joint press conference in Tokyo Tuesday, in which Blinken and Austin confronted China’s aggressions in unison with their Japanese counterparts, Seoul officials took a more nuanced approach amid the Sino-U.S. rivalry.

Foreign Minister Chung said during the press conference that the two sides reached consensus in three areas: that the North Korea nuclear issue is an urgent one that requires close cooperation; to make diplomatic efforts based on ironclad security for a peaceful solution to the issue; and to work together on a coordinated strategy toward Pyongyang.

He said that South Korea and the United States “will continue to cooperate to advance the peace process on the Korean Peninsula” and decided to pursue “mutual, future-oriented cooperation” between Seoul, Tokyo and Washington “for the sake of peace, security and prosperity in the region.”

Chung also confirmed that no official request had been made by Washington for Seoul to join an expanded Quadrilateral Security Dialogue, or Quad, a security cooperation mechanism among the United States, Japan, India and Australia, seen as a way to contain China.

However, Chung added, “The Korean government maintains the position that it is possible for us to cooperate with any consultative body if it conforms to our principles of inclusiveness, openness, transparency and cooperation, and if it is in our national interests and contributes to regional global peace and prosperity.

Blinken described the Quad as “an informal grouping of like-minded countries that have come together to deepen cooperation on a whole host of issues,” many of which the United States is “also working on very closely with the Republic of Korea.”

He continued, “We find that working through some of these sub-regional groupings, including the trilateral work we do with Korea and Japan, is very beneficial in addressing some of the challenges we face,” pushing for three-way cooperation with Washington’s closest allies in the region. 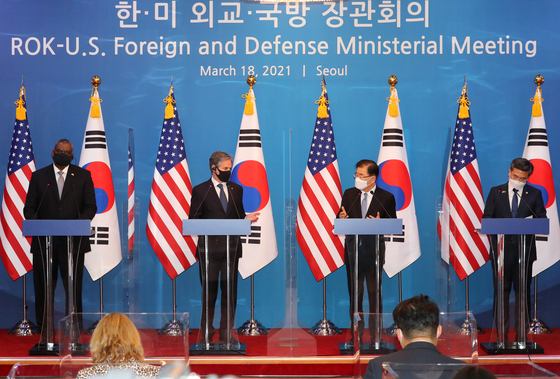 Austin said during the press conference that there was “no daylight” in Seoul and Washington’s “robust combined defense posture” and in their commitments to the denuclearization of the Korean Peninsula.

But the transfer of wartime operation control (Opcon) may take more time, he said. South Korea initially envisioned taking back operation control, which would give a South Korean general command of allied forces on the peninsula during wartime, during the Moon Jae-in administration, which ends in May 2022. The Covid-19 pandemic and other factors have delayed that process.

“Our forces remain ready to fight tonight, and we continue to make progress toward the eventual transition of the wartime operational control to an ROK commanded future combined forces command,” said Austin. “While meeting all the conditions for this transition will take more time, I am confident that this process will strengthen our alliance.” ROK stands for the South's official name, the Republic of Korea.

The Pentagon chief likewise said, “We have a lot to look forward to as together we address global security challenges and engage in long-term strategic competition, mainly with China.”

Blinken and Austin offered their condolences after shootings at three spas in Atlanta Tuesday killed eight people, including four women of Korean descent.

Just before the joint press conference, the four officials watched the initialing of the 11th Special Measures Agreement by Korea’s chief negotiator for the defense cost-sharing negotiations, Jeong Eun-bo, and Rob Rapson, the acting U.S. ambassador to Seoul.

After 18 months of wrangling, Korean and U.S. negotiators agreed to a six-year deal, with Korea paying 1.183 trillion won ($1.051 billion) in 2021, a 13.9 percent increase from 2019. Korea is expected to pay more over the next four years from 2022 to 2025 at a rate that mirrors increases in Seoul’s own defense spending compared to the previous year.

Blinken and Austin on Thursday afternoon paid a courtesy call on President Moon Jae-in at the Blue House, who told them that the two countries “will continue to cooperate closely for complete denuclearization and lasting peace on the Korean Peninsula.”

This marks the first meeting between Moon and members of the Joe Biden cabinet, amid concerns that Seoul and Washington may not always see eye-to-eye on the pacing of the denuclearization process and inter-Korean cooperation initiatives.

Moon said that Korea and the United States, as 70-year partners, share common values “such as democracy and human rights, and will cope with common challenges together,” said the Blue House in a statement.

Moon also pledged to “continue to work toward restoring Korea-Japan relations,” addressing the ongoing bilateral tensions between Seoul and Tokyo.

Seoul and Washington in a joint foreign and defense ministers’ statement, the first in five years, emphasized that North Korea's nuclear and ballistic missile programs are a “priority” and reaffirmed the importance of full implementation of relevant UN Security Council resolutions by the international community. They agreed that all Korean Peninsula issues should be “addressed through a fully-coordinated strategy toward North Korea between the ROK and the United States.”

The statement noted, “Against the backdrop of increasing challenges to the regional security environment, the shared values of the ROK-U.S. Alliance undergird the two countries' commitment to opposing all activities that undermine and destabilize the rules-based international order.”

The two sides also reiterated a “shared commitment to maintaining peace and stability, unimpeded lawful commerce and respect for international law” and said they will continue to work together to “create a free and open Indo-Pacific region” through cooperation with the New Southern Policy, the Moon Jae-in administration’s initiative for economic and diplomatic cooperation with Asean countries and India.

The two sides agreed on a “firm commitment” to the transfer of wartime Opcon and building on the progress so far, “the leaders pledged to continue efforts toward the transition.”

Washington in the statement also “reaffirmed the U.S. commitment to the defense of the ROK and its extended deterrence using the full range of U.S. capabilities.” 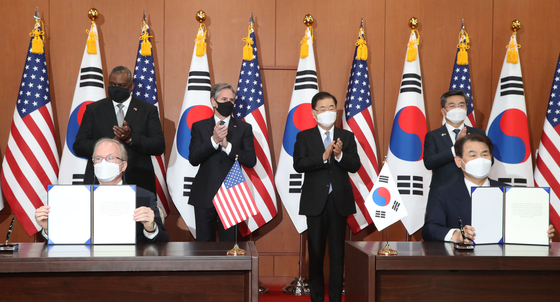